500 lb (230 kg)[3]
A carrion crawler was a burrowing aberration that scavenged the dead and occasionally preyed on living creatures. Similar to a giant, toothed centipede in appearance, carrion crawlers were often accompanied by a foul odor of death, which warned others of their approach.[6]

Although their nature ultimately rested in the Far Realm, it was thought by many, and indeed was possible, that carrion crawlers were created through a mad wizard's experiments.[2]

Carrion crawlers were large, pale yellow, and greenish aberrations whose appearance was akin to a three- to four-foot-long centipede. Crawlers possessed eight long tentacles protruding from the sides of their heads, allowing them to stun prey.[6] Carrion crawlers also had two eye stalks, through which they could perceive their surroundings even in the darkest caverns.[2] Additionally, carrion crawlers had a highly developed sense of smell.[6]

Carrion crawlers often laid their eggs within a meal or mounds of waste. When the young hatched, often in numbers reaching into the hundreds, the baby crawlers quickly turned on one another, eating each other. Fortunately, this thinned down the numbers of the carrion crawlers substantially, who were also less dangerous at this time, possessing a less effective venom than their adult equivalents.[2]

Beyond the Prime Material plane, carrion crawlers could be found in the Domains of Dread.[7]

Carrion crawler brain juice was a dangerous paralytic poison that could be extracted or simply beaten out of the aberration's organ. The simplicity of acquiring this poison made it commonly used by orcs in the Urghosh locking mechanisms.[8] 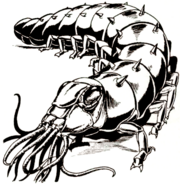 A carrion crawler from Monstrous Compendium Volume One. 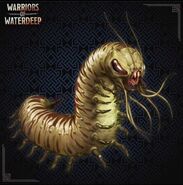 A depiction of a carrion crawler from Warriors of Waterdeep.