Castle Ward, Waterdeep
Castle Waterdeep was a castle located in the city of Waterdeep.[1] It was the seat of the city's government.[2]

Its walls were 60-ft-thick (18 m) on average, and high enough that when banners were displayed in honor of visiting parties, they were visible from many areas of the southern city.[1] They were also enchanted with magic spells.[3]

The road up to the castle's main entrance was steep-sided and winding, with towers guarding it at regular points.[2]

Most of the castle's passageways were permanently lit by continual light spells.[3]

The castle held enough food to feed 50,000 people for ten days, and could accommodate up to 540 prisoners in 90 cells. There were many dungeons beneath the castle, mainly used for storage, which linked through to the Citadel of the Bloody Hand, creating a security concern.[4] There were also deep wells beneath the castle that provided clean drinking water.[5]

The castle was garrisoned by 1,400 of the City Guard, who, along with members of the City Watch, were trained in its courtyard. Seventy warhorses were kept in the castle stables. Thirty guards were always armed and keeping watch on the battlements, while twenty crossbowmen and two wizards were always on duty in a guardroom close to the castle gates.[4]

The battlements of Castle Waterdeep were used for the hanging of non-nobles.[6]

Work began on the castle in the Year of the Thundering Horde, 963 DR, outside and to the north of the city walls. It was finished on Higharvestide, the Year of the Haunting Harpy, 974 DR, the same year Laroun rose to War Lord.[7][8]

During the Time of Troubles of the Year of Shadows, 1358 DR, a party was held at Castle Waterdeep in honor of a supposed avatar of the goddess Selûne. It was attended by Lord Piergeiron, Khelben Arunsun, Tertius Wands, Mirt and Asper, and Fenn Estelmer and Kyriani, who came to investigate the avatar. However, a trio of the Dark Army of the Night crashed the party and made a failed attempt to kidnap the avatar, before they were arrested by the City Guard. Kyriani later confronted the avatar in the castle kitchens, but the two fought a spell-battle that spilled out into the corridor before Lord Piergeiron intervened. Khelben helped Kyriani escape with a passwall through the castle walls. Dramatically, she leaped out of the cliff-side castle and was caught by her lover Rellamyn on his flying horse. He and his companions swooped the castle, dodged flaming arrows from its defenders, before they departed.[9]

Novels
To Catch a Thief

The entrance to Castle Waterdeep. 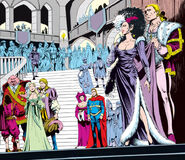 A party in Castle Waterdeep.
Community content is available under CC-BY-SA unless otherwise noted.
Advertisement