listen) was a miserable mix of buffalo, dinosaur, warthog and hippopotamus that lived in swamps or wastelands.[1][8]

Catoblepases had the large body of a buffalo, which sat atop squat legs that resembled those of a pachyderm. A catoblepas' head resembled that of a warthog, and sat atop an elongated neck that seemed ill-suited for actual support.[8] Perhaps the most terrifying feature of these beasts were their large and deadly bloodshot eyes.[14]

Catoblepases possessed a scent that reeked of death and famine, not dissimilar to the swamp gas that filled their favored environment. The scent was reminiscent of skunk's stench mixed with foul bog vapors.[1]

These monstrous creatures possessed animalistic intelligence, spending most of their time wandering around swampy domains to graze on grass, weed, occasional carrion, or freely-slain adventurer. Whenever the full moon shone, they ventured out further to hunt for meat.[8][1]

A catoblepas could easily stun prey with its mace-like tail, whipping it around incredible speeds.[8] Its most feared ability however was its deadly gaze[15] which rotted away the flesh of creatures caught in it[1] and affected the Prime Material, Astral, and Ethereal planes simultaneously.[5] Thankfully, the beast's neck was weak and it took a catoblepas significant effort to raise its head and gaze upon opponents.[4]

When several catoblepases were locked in combat, they cooperated and tried to herd the targets into the crossfire of their death rays.[4] However, catoblepases were intelligent and opportunistic enough to size groups of humanoids up instead of blindly attacking them. Unless on a hunt, desperate for food, or defending their youth, catoblepases did not attack groups of humans or other humanoid creatures. Furthermore, catoblepases learned from their previous mistakes and encounters.[4]

Catoblepases were very rarely encountered in the wild.[8] While they roamed in swamps and marshes, their continued presence in an area cultivated beneficial, disease-causing flora to wither away and die. The fetid influence of catoblepas' presence in the area rendered any beneficial qualities of local flora or restorative qualities of freshwater diminished. The very gases of their swamps started to carry the beasts' musk, and local wildlife would become aggressive, or more likely deceased.[1][4]

Even though they liked being submerged in putrid muck, catoblepases laired in sheltered areas with firm ground, surrounded by thick reeds or other boggy vegetation. The beasts never guarded their lairs, as they often were the most deadly creatures in the vicinity. Coins, gems, and other valuables often ended up scattered around their lairs, not because they valued those items but because they were left by defeated adventurers and the creatures paid them no mind.[4]

Catoblepases and gorgons were known to be used by assassin bugs to gestate their larvae, as was evident by hides pockmarked left by emerging juvenile assassin bugs.[16]

The biggest concentration of catoplebases in the Realms was in the Marsh of Chelimber[17][6][18], or occasionally in some of the marshes or peat bogs of High Moor in the Western Heartlands.[7] They also dwelled in the Rat Hills, by Waterdeep.[10]

Outside of Toril, catoblepases could be found on the worlds of Aebrynis, Krynn, and Oerth, as well as the Domains of Dread and the Shadowfell. Some shadow beast catoblepases could travel between worlds and spread death and they were difficult to destroy since after death, they reformed back in the Plane of Shadow.[2] Rarely, catoblepases could also be found in the Border Ethereal and the Ethereal plane.[11]

Catoblepas could be pacified by feeding them eldella ferns, rendering them significantly less dangerous. Humanoids that sought to domesticate them could slowly approach the beasts, harness them, and lead away from the swamps. Keeping catoblepas happy was the main tool of domestication, as happy catoblepas were cooperative, and keeping them happy meant providing a constant supply of food. Domesticated catoblepas consumed wagonloads of straw, oats, pigs, catfish, and mangers of mice and snakes.[19]

Domesticated catoblepas were as easy to train as regular oxen, but were less loyal than horses or dogs, and unlike the latter showed no interest in games. If not happy or left unsupervised, catoblepas left their trainers and moved back to their homelands in the wet wilderness. Their omnivorous, scavenging nature often led the herd to consume sickly or dying members, and they would easily do the same to their humanoid masters given the opportunity.[19]

Catoblepases were vulnerable to the animal friendship spell, cast by experienced druids. When these monstrosities fell under such magical charm, they remained friendly towards the caster, unless forced to be sword-fodder.[20]

“
I stared for a moment, then realization came crashing down. These were catoblepas, creatures that could normally kill with a glance! Here they were, rolling about in the mud like domestic pigs, and showing puppyish affection to a woman whom they would normally kill, instantly and mercilessly! I made some incoherent noises, and finally choked out words of astonishment.
”
— Brother Twick[21]

The Cormyrean Marsh Drovers of the Farsea Marshes were known to have whole herds of domesticated catoplebases.[8][9] They were domesticated gradually over many generations of breeding, with eldella ferns used to neutralize their death rays.[22]

Both the aggression and instinctual solitude of the catoblepases was bred out of them by the Drovers,[22] and they did not use their deadly gazes on the farmers since they considered them to be parts of their packs.[21] The catoblepases were also pampered, their trainers regularly combing their furs with wire brushes and polishing their tusks and claws with rabbitskins. Their feet were equipped with cleats to help them move across the hard surfaces of human villages.[19]

Domesticated catoblepases were often trained to pull plows, uproot trees and serve as beasts of burden.[19] The biggest herd consisted of twenty beasts that often protected the Drovers from raiding by orcs, trolls, and bullywugs.[22] Milking female catoblepases was still a tricky task. They allowed themselves to be milked only after a large meal of two large goats or pigs, and only if alone with the milkmaid and outside to enjoy the evening skies. The milking was done once a month.[19]

The Vast Swamp was also known to host domesticated catoblepases.[9]

Catoplebases of the Shadowfell were known to accompany the Raven Queen. Her worshipers often embarked on hunts for catoblepases searching for their deity's blessing, and those who returned from the hunt alive and bearing one's head earned great esteem among their peers. Catoblepases were also considered suitable quarry for the Wild Hunt by the inhabitants of the Feywild.[2]

Catoblepases relied on their extremely keen sense of smell and darkvision that reached up to 60 feet (18 meters).[1]

Catoblepases also found eldella ferns to be delicious and, if lightly toasted and fed to these beasts, neutralized the deathray for 24 hours.[23]

They mated for life and lived in solitude, with a mate, or raising an occasional singular calf. Catoblepase parents were extremely protectives of their offspring and attacked any creatures that approached the calves.[1][4]

The flavorful death cheese sold by Aurora's Whole Realms Catalogue was made by using catoblepas milk gathered by blind monks.[24] It could be found for sale in the markets of Eagle Peak.[8] Deadeye Butter was made using catoblepas milk and herbed to delicate perfection.[25] Surprisingly enough, all catoblepas products were nutritious and delicious, including raw milk and meat.[22] Catoblepas milk was thick as treacle, the color of cranberries, and smelled of baked ham.[19] Death Cheese was also used to brew Catoblepas Death Cheese wine - especially strong alcoholic concoction found in the seedy areas of Neverwinter.[26]

Catoblepas horns were valued at 30 gp.[27] Other parts of catoblepas were used by wizards, such as eyes, heart, and brain. These farmed spell components were sold in the markets of Eagle Peak and Proskur.[22]

Lynx eye gem could be dissolved in catoblepas tears to create a base used for all healing or necromantic potions, or in brewing such substances as Keoghtom's ointment.[28]

A horrific catoblepas dwelt in a foul-smelling muckhole in the Temple of Orcus in the Underdark below the Bloodstone Pass in the early 14th century DR.[29]

In 1366 DR, three riders of Lord Cleedis's and Janol Famisso's squadron were felled by a deadly catoblepas during the ride towards Ankhapur.[30]

Rumors of catoblepas-mounted lizardfolk raiders menacing the eastern edge of the Mere of Dead Men along the High Road reached the worried ears of the Lords of Waterdeep. The dangers and raids on the road were true, but the tales regarding the catoblepas were never confirmed.[31]

Catoblepases were popular subjects of stories and legends due to their fearsome and dangerous nature, their silhouettes used in heraldry to symbolize death or doom.[1] It was believed that the first catoblepases were created by a Netherese archmage,[8] though others claimed that these monstrosities were created by gods of rot and pestilence as symbols of their divine influence. Locals considered it to be an ill omen when one of these creatures established a lair nearby, though these claims of misfortune were just superstitions.[1]

Other tales said that individuals of the impure heart could tame catoblepases. These stories were spawned by the fact that warlocks, death knights, and even hags were known to domesticate the beasts and use them as mounts, with some legends also claiming that hags raised these creatures like cattle and fed on their milk. Certain degenerate creatures intentionally inhabited areas dangerously close to catoblepas territories, often with the intent of going unnoticed.[1][1] 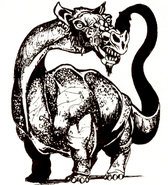 A catoblepas from Monstrous Compendium Volume One.

A catoblepas miniature by Ral Partha.

A charging horde of monsters in the Temple of Orcus, including a catoblepas in the back.