Underground
A cave fisher was a lobster-like monster which inhabited subterranean locations and ambushed its prey using a sticky filament similar to a strand of giant spider silk.[1][3][4]

Cave fishers grew to about 7 feet (2.1 meters) in length and had a hard, chitinous shell arranged in overlapping plates for an exoskeleton.[3] It had eight legs and two forelimbs that ended in large pincers. Living underground, cave fishers were sightless creatures that used multiple auditory sensor organs to detect prey. These organs were located on the head and could be mistaken for multiple eyes.[5] The creature had a large proboscis from which it shot a long (up to 60 feet (18 meters)) sticky filament.[1][3][4]

The cave fisher hid on ledges above passageways and hunted by emitting a long strand of sticky filament, either dangling it to catch passing creatures such as bats, or shooting it at a creature as it wanders by.[1][3] They could also secrete their adhesive onto their feet and anchor themselves to a ledge, wall, or ceiling once they found a good hunting spot.[4] To release themselves, they secreted a substance from their proboscis that contained their blood that dissolved the adhesive.[3][4][5]

Cave fishers would attack any creature up to man-sized, but was intelligent enough to avoid large groups, preferring to pick off scouts, loners, and stragglers. Normally cave fishers worked alone in a area within 300 feet (91 meters) of its lair,[3] but sometimes they could be found in small groups of less than five, and these pods were known to coordinate ambushes of small parties.[1][3][4] This cooperation usually ended when there was food to be fought over.[1] Extra food, alive or dead, was wrapped in filament and stuck to a surface in their lair for later consumption.[3][5]

Cave fishers had no use for clothing, armor, or weapons, so their lair was usually strewn with the possessions of former victims.[3][4][5]

On a successful attack, the victim was stuck to the cave fisher's filament and was slowly drawn up to the cave fisher's level where it attacked with the two front pincers. Cave fishers could reel in victims weighing up to 200 pounds (91 kilograms)[1] or possibly 400 pounds (180 kilograms)[3][4] (91 to 182 kg). Their filament was very difficult to cut, perhaps even requiring a magically enhanced blade,[4] and any failure to do so resulted in the blade being stuck fast.[1]

Cave fishers had flammable blood and therefore were very adverse to fire.[1] Casting silence on a cave fisher made it freeze in place as it listened intently, attacking only (and much less effectively) if it was attacked first.[5]

The filament was almost invisible in a dark cave, even at close range.[4] A detect snares and pits spell would reveal them, however.[3]

Cave fisher diet was primarily bats,[1][3][4][5] and they never attacked anything that they detected was bigger than themselves, but they were always cautiously looking for larger prey they could surprise, like a lone goblin, orc, or foolish adventurer.[3]

Cave fishers could live over one hundred years and females mated about every twenty years. They sent out a ultrasonic keening above the hearing range of humans and demihumans that attracted all males within miles of her lair. The first male to approach the female was allowed to mate with her and then became her victim. Any latecomers were forcefully rejected. After a three-day gestation period, the female laid a clutch of five to nine fertilized eggs in the body of the male and then departed to establish a new lair away from her previous nest. Within a month, the eggs hatched, the young lived off the carcass until it was depleted, and then they scattered to establish their own lairs. It took a little over two tendays for the young to reach half their adult size, and then their growth slowed, reaching full size in a year.[5]

Almost every part of a cave fisher was usable after the creature has been killed. The meat was edible and tasted similar to crab sauteed in stout wine.[1] Its blood was used for concocting several dwarven spirits, although some hearty dwarves drank the alcoholic blood straight.[1] Extruded cave fisher filaments could be harvested and treated to dilute the adhesive and then woven into ropes that were incredibly strong for being so thin they were nearly invisible.[3][4] The diluted adhesive could even be applied to gloves and boots to improve their grip when climbing.[3] The chitinous shell was very tough and could be used to make armor, tools, and even jewelry.[1]

Cave fisher eggs that were a tenday old or less were highly valued for their alcoholic content plus psychedelic properties. A sip from one of these eggs could cause an average human to become quickly intoxicated for hours while experiencing hallucinations. Consuming the full contents of one of these potent eggs was usually fatal. Fresh cave fisher eggs sold for 50 to 100 gold pieces in most large cities.[5] 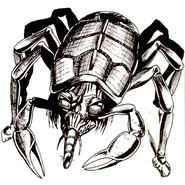 A cave fisher from 2nd edition.

Adventures
Dungeon #28, "Visitors from Above" • War of Everlasting Darkness