Celestials were powerful outsiders, typically of good alignment, and the cosmological counterpart to fiends. Just as fiends, celestials came from many different origins.

While the term "angel" properly referred to a subset of celestials, those on the Material Plane helped by any celestial being might claim to have been "visited by an angel".[4]

The following were the known types of celestials:

Angels
Angels, also called aasimon, were immortal, winged beings empowered by the gods whom they served. An angel that committed an evil act became an outcast and was no longer necessarily bound to be a good creature.[5]
Archons
Not to be confused with the similarly named elemental archons, celestial archons were personifications of law and good. They had a strict hierarchy and were consistently at odds with fiends, particularly demons.
Guardinals
The animal-featured guardinals were powerful outsiders of neutral good alignment native to the House of Nature.[6]
Eladrin
A race of chaotic good eladrin who had wild, joyful natures. Of the celestials, they had some of the shortest tempers regarding injustice and oppression. 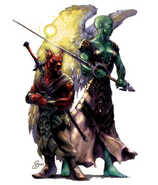 A lantern archon, a hound archon, and a planetar.

A firre and a leonal.

An avoral, a ghaele, and an astral deva, all being summoned to battle a marilith and vrock.
Add a photo to this gallery