listen), or soil beasts, were grue native to the Elemental Plane of Earth.[3]

Because of their destruction of valuable minerals, chaggrins were considered vermin on their native plane.[3]

On the Elemental Plane of Earth, chaggrins appeared as hideous bipedal lumps of clay. Their tiny eyes gleamed with light. When encountered on the Prime Material Plane, chaggrins often looked like large moles or hedgehogs, though their skull-like heads made it evident that they were not normal creatures. Though only measuring a few feet in length while in this form, chaggrins could weigh 140–210 pounds (63–95 kg).[3]

Chaggrins could change their shape at will. While in their humanoid shape, they could merge into any surface of earth or stone. They could not move about while merging with the earth or stone, but could wait and hide. They used this ability to surprise unsuspecting targets.[3]

The sharp claws of the chaggrin were capable of inflicting serious wounds to their enemies. A favored tactic was to latch on to their target so the struggling enemy damaged itself further. While in hedgehog form, the chaggrin's quills also damaged their enemies.[3]

Chaggrins were completely immune to any earth-based magic. In fact, the presence of a chaggrin within 40 ft. (12 m) of such magic would dispel it. This included permanent spells. Magical items were unaffected by this.[3]

Chaggrins lived in extended families, but often fought each other over various matters. Mates were found by stealing them from other families.[3]

On the Prime Material plane, chaggrin could sometimes be found in the Shadowdale region.[6]

Aside from crysmals, who used their psionic powers to transform chaggrins into servants, and the dao who sometimes enslaved chaggrins for use as diggers, most inhabitants of the Elemental Plane of Earth killed any they came across. This was due to the fact that chaggrin consumed valuable minerals. Chaggrins were considered a delicacy by earth elementals. Elemental mages often kept chaggrins around to dispel earth-based magic.[3]

Exiled chaggrins often visited the Prime Material Plane. It was not uncommon to find them serving sinister creatures from the Underdark such as duergar and derro. Gnomes worshiping Urdlen considered chaggrins to be sacred creatures.[3] 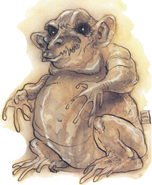 Adventures
Curse of the Azure Bonds • House of Cards