Dwarves, humans, orcs[1]
Chandos was the fifth planet from the Sun in Realmspace.[1] Seen from Toril, it looked like a brown-green smudged orb whose features changed every few nights. It was one of the Five Wanderers, the five superior planets of the Torilian solar system.[2]

Chandos was composed mainly of water, filled with enormous ever-shifting piles of rocks which sometimes grew tall enough to form hundreds of unstable islands. The piles of rock changed randomly every full rotation of the planet, as well as following small disturbances on its surface, forming new islands and sinking old ones with no predictable pattern.[1]

The planet's climate was relatively temperate, considering its distance from the Sun. However, its lack of an ozone layer caused wide variations in temperature during the day-night cycle.[1]

The planet's animal life consisted mostly of peaceful land animals such as rats, rabbits, groundhogs, squirrels, and moles, that subsisted on the planet's plant life. The oceans were populated with extremely aggressive and intelligent fish.[1][3]

Sometime in the distant past, unknown to later survivors on the planet, two spelljammer ships—a tradesman manned by humans and another crewed by dwarves—sailed toward Selûne carrying stolen goods and orc prisoners intended to be sold as slaves to the neogi. When flying close to Glyth, the ships were attacked by illithid ships and decided to land on Chandos to renew their air supply and to conduct repairs. The combined weight of the ships caused the terrain to shift, destroying both ships and killing the wizards in the crew that were capable of restoring them. After the incident, friendship between the crews unraveled and the three races went their separate ways, each seeking to destroy the other two for generations thereafter until no later survivor remembered the reason why.[1]

On another occasion, the tradesmen Lliira's Child and Lady's Charm were attacked by the nautiloids Mind Sphinx and Skull Crusher in the vicinity of Chandos. Lliira's Child was damaged and crashed on the planet, while the Lady's Charm was boarded by the mind flayers, who killed the entire crew and left the derelict ship in a slowly decaying orbit around the planet.[4]

The three main populations of Chandos focused primarily on surviving the planet's constant convulsions and searching for food. After generations, the dwarves had completely forgotten their heritage as miners and the humans had become primitive and aggressive. Their old and mutual racial hatred prompted them to attack each other (and the orcs) on sight. However, the orcs developed a collaborative society, helping each other in their search for food and mostly keeping to themselves and avoiding contact with the human and dwarf camps.[1]

By 1367 DR, the humans were led by Zachariah Silverblade and the orc tribes were led by the chieftain Og Moscog.[1] 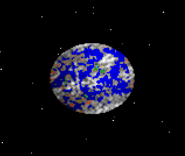 A depiction of Chandos from the Spelljammer: Pirates of Realmspace computer game.