Edit
watch 06:20
The Jungle of Chult - Stream of Annihilation Special - 'Forgotten Realms' Lore
Do you like this video?
Play Sound

Chult was located at the westernmost end of the Chultan peninsula, in the southern part of the Trackless Sea, off the coast of Calimshan.[1] As a result of the Spellplague, Chult was cut off from the mainland, becoming an island,[4] but following the Second Sundering it was reunited with the mainland.[5][6] Regardless of geographical status, Chult has always been remote and isolated, forming a mountainous jungle of savage beasts, hulking dinosaurs, and disease-ridden swamps. Human tribes, goblins, and even stranger monstrous folk haunted the thick jungles. Nevertheless, Chult drew adventurers who sought its legendary riches. The primordial Ubtao was almost exclusively revered in the land, for the divine powers of Faerûn awarded Ubtao the dominion over the land of Chult in exchange for the deity's vigilance over the threat from under the Peaks of Flame.

The humans of Chult lived in tribal communities, consisting of a dozen or so families, which moved from one area to the next when the poor soil of the largely-jungle covered peninsula becomes depleted. For hunting and defense they relied on non-metallic weapons like clubs, bows and shortspears. Harder metals like iron and steel were unavailable to them, and the few brought in by outsiders were nowhere near enough to sufficiently arm any significant number of people.

Magic was generally feared, and each tribal-family generally had only one wielder of arcane magic, who performed hunting ceremonies and brewed potions to aid the hunters. Despite this restriction on arcane spellcasters, the number of people with an aptitude for magic was the same as anywhere else in Faerûn. Subsequently, the Chultan attitude towards the arcane caused some arcanists to flee into the jungle to practice their art alone. In the days before the Spellplague many also traveled to study in Mezro.

Aside from humans, wild dwarves, goblins, aldani, pterafolk, bullywugs, and lizardfolk also inhabited the land. Exotic creatures as chuuls, hydras, nagas, troglodytes, trolls, and wyverns existed in smaller numbers. The dominant predators of the land were the dinosaurs, who were worshiped by many of the natives as aspects of the primordial Ubtao.

"Slimes" were a present danger for travelers in Chult, namely zygoms, green slimes and yellow molds.[7]

Chult was the prime destination for people who liked to hunt or collect monster skulls. These safari hunters paid good coin for exotic creatures to claim as trophies without actually having to risk their own lives.[8]

It was said by many that the jungles of Chult were the most dangerous places in Faerûn. The plants were intelligent predators while the predators themselves were massive and armed with huge teeth and claws. Insects bit and stung travelers almost constantly, the heat and humidity were almost unbearable and the undergrowth contained a multitude of poisonous snakes. Worst, however, was the disease that ran rampant in the area. Most things in the jungle had some sort of illness or parasite and it was very easy to catch such illnesses off them. Even the water was tainted and had to be boiled if it was to be drunk. On top of all this, the intelligent creatures that eked out an existence in the dense foliage were perfectly happy and sometimes went out of their way, to track travelers in order to hunt them down and kill them. Yuan-ti, batiri, and other species that have learned to survive in this place needed food; adventurers would tend to suit that need nicely.

Yet those adventurers kept on coming in their droves to the Chultan jungles as rumors of endless veins of gold, huge gems and ruined empires stuffed to the brim with magic and riches kept surfacing in taverns across Faerûn and many were willing to brave the dangers of the jungle for a slice of that fabled wealth.

The Peaks of Flame were the abode of salamanders and other creatures of fire. The peaks were also said to sit over a pair of iron doors that led to the Fugue Plane, the world of the dead. Legend had it that at the end of the world Dendar the Night Serpent would tear down these doors and break through into the world.

In the thickest parts of the jungle lay the Valley of Lost Honor, once the last refuge of the Eshowe before they were destroyed. Legends said that all of their wealth was left behind in caves in the valley, while more sinister legends claimed the evil deity of Eshowdow, actually Shar in disguise, resided there, recruiting followers and planning revenge.

The jagged and treacherous coast of southwestern Chult created a hazard for ships, and merchants from northern Faerûn have learned to give it wide berth. Fearing not only the cliffs, sailors spoke of whirlpools, freak storms, aquatic monsters, flying dinosaurs and giant eagles. A few brave (or foolish) sought fortune to explore the caves along the coast, hoping they would lead into rich mines under the jungle.

The southern Chultan coast extended east until the Snout of Omgar, a mountainous island that marked the boundary between Chult and the coast of Samarach.[9] The Snout was the domain of the tortle race.[10]

Fort Beluarian
A small outpost that belonged to the Flaming Fists, a mercenary company based in Baldur's Gate. The troops would work with adventurers to promote the cause of good, and provide shelter to adventurers in dire need. In spite of this goodwill, the city had, over the Hundred Years of Chaos, been burnt to the ground twice by local inhabitants of Chult only to be rebuilt by the Baldurians. The colony was also in competition with the much larger Port Nyanzaru.[4] The fort presently contains a prison, often holding dangerous inmates, dissidents, and P.O.W.s. Some in Port Nyanzaru and the larger Amnian empire have labeled Fort Beluarian a "penal colony," a charge that Baldur's Gate vehemently denies.[citation needed]

Mezro
Mezro was the largest civilized area in Chult and a holy city to the Chultan tribes. The city was generally peaceful and few people, except for outsider-adventurers, carried weapons. The city was protected by the undying baras of Ubtao and six paladin-like chosen who ruled the city.
Until 1363 DR the city was surrounded by a magical wall, preventing it from being seen and causing confusion in those who approached too closely, but after a victorious battle against the batiri goblins this protection was lowered. After this it was a safe haven for explorers battered by the harsh jungle until the Spellplague, at which point it collapsed into the earth.[4]

Port Nyanzaru
A harbor port settled by Amnians, Port Nyanzaru was also a mighty fortress, built to withstand pirate attacks and the threats of the jungle itself. Controlled by Amn, Nyanzaru was a booming, densely populated community that brought in much wealth for its parent state.[4]

One of the most terrifying local legends of Chult involved a mysterious beast called the Uluu Thalongh. This entity was able to possess trees and plants, making their branches into violent weapons. Moreover, it could mimic the voices of previous victims. No one was ever able to discover who or what the creature actually was.[11]

In the upper canopy of the jungles, black dragons were rumored to roost.[12]

A map of Chult circa 1373 DR as featured in the House of Serpents Omnibus.

A 15th century DR map of Chult from The Fanged Crown. 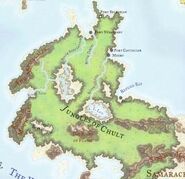 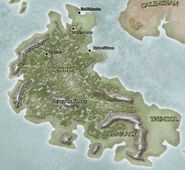 A map of Chult, circa 1479 DR.
Community content is available under CC-BY-SA unless otherwise noted.
Advertisement