The City Guard was a highly trained military organization of fully-armored soldiers responsible for defending the great city of Waterdeep and patrolling its surroundings.[2][1][4]

The City Guard served many purposes related to defending the city. Within Waterdeep, the Guard protected the city walls, gates, and its important buildings, as well as provided escorts for government officials. It also patrolled the harbor and the roads leading from Waterdeep to Amphail, Goldenfields, and Daggerford.[3]

The exact size of the City Guard was a secret only known to the Lords of Waterdeep, but it was thought to be around 1,200 strong.[4] In times of war, it could enlist mercenaries and grow to a contingent of up to 12,000 members.[2]

Members of the City Guard were paid a salary of 6 gp per month. No fee was required to join the ranks.[2]

Like the City Watch, the City Guard had specific titles for the members of their forces. A City Guard patrol usually consisted of twelve members, whose commanding officer was called the civilar. A commanding officer holding the rank of captain was known as an aumarr, or senior civilar, while one holding the rank of lieutenant was known as a shieldlar, or, simply, civilar. The patrol also contained one armar, or sergeant, and ten guardsmen or guardswomen, or trusties.[2][5][6] A patrol could also be led by a sergeant.[1]

Other officer positions existed within the ranks of the Guard, not typically associated with regular patrols. In particular, the ranks of valabrar and torsin were responsible for escorting important individuals within the city, while also composing honor guards and bodyguards to diplomats and illustrious visitors to the city. Officers holding those positions outranked captains.[5][6][2]

The City Guard also had a special branch called the Griffon Cavalry. Its members were responsible for patrolling the skies of the city riding griffons.[3]

The commanding positions of the Guard held specific individual titles. Some of those positions existed at all times, while others only during war. The perennial command positions were Seneschal of Castle Waterdeep, Defender of the Harbor, Master of the North Towers, and Master of the South Towers. Command positions only activated during wartime were the Lords' Hand and Lords' Champion. The Warden of Waterdeep commanded the entire organization.[3][6]

The City Guard's duty was to investigate foreign threats to Waterdeep and to protect the city against them.[1] Their duties included guarding the city's gates, important locations, and citizens.[3][7] City Guards could be found posted at Castle Waterdeep, Piergeron's Palace, the city walls, and its surrounding countryside.[2]

Around 1357 and 1358 DR, soldiers of the City Guard wore yellow scale armor under green cloaks and tabards. They wore matching conical helms of green and gold with fur trim, chainmail neck-guards, and topped by a spike.[1][8] They could also carry a shield. Both tabard and shield bore the symbol of Waterdeep, a crescent moon reflected over a bay, surrounded by seven stars. They wielded longswords, daggers, and darts coated with a paralytic poison. On missions outside, they were also armed with bows.[1]

By 1368 DR, the standard uniform of the City Guard was silver scale mail under black, gold-trimmed tabards. Standard armament included daggers, rods, shortbows, and shortswords, with the possibility of additional armament for specific assignments.[4]

Around 1372 DR, Waterdeep's City Guards wore a uniform of polished chainmail covered with a tabard in black cloth with gold trim. They carried various weapons as their posts would require, including longswords, shortbows, shortspears, shortswords, daggers and clubs.[2]

One day in the Year of the Prince, 1357 DR, a huntsman informed the City Guard of a magical tower erected within a single day, a full day's hard ride north of Waterdeep's Trollwall. A City Guard patrol, including Pern, investigated and attempted to scale the tower. Imgig Zu, master of the tower, animated his gargoyle minions to attack the guardsmen.[1]

In the Year of Shadows, 1358 DR, when the skies over the city darkened and an interdimensional wormhole (from the Great Door) disgorged a swarm of gargoyles and kenkus over the city, a City Guard troop and Khelben "Blackstaff" Arunsun arrived to hold them off. [9] Shortly after, during the Time of Troubles, members of the City Guard stationed in Castle Waterdeep during a party tried to stop a trio of the Dark Army of the Night from kidnapping a false avatar of Selûne. However, they were hindered by the Dark Army's utter darkness and then by blinding light. The avatar herself stopped the trio with a bind spell, and the City Guard arrested them. Later, Lord Piergeiron ordered Rathnar of the City Guard to arrest Kyriani after she fought with the avatar, but Khelben Arunsun took charge of the prisoner and let her go.[8]

The 3rd company of the High Guards fought in the final battle of the Second Dragonspear War at the castle in the Year of the Wyvern, 1363 DR.[10]

When the Shining Crusade threatened the Sword Coast in the Year of the Banner, 1368 DR, one hundred guardsmen joined the Coalition army under the command of Torsin deLancie.[11] 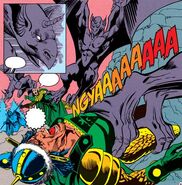 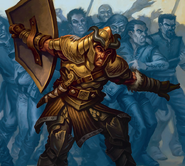 A City Guard holding back a crowd, from Lords of Waterdeep.