Vansi Bloodscar (as of 1479 DR)
Formerly: The Many-Starred Cloak
The Cloak Tower, formerly written as the Cloaktower, was a wizard tower located in the River District of Neverwinter. The tower took its name from its original owners, the order of wizards named the Many-Starred Cloak who defended the city in the mid-to-late 14th century DR. But, in the late 15th century DR, it was seized by the Many-Arrows orcs and served as their fortress in their occupation of that part of the city.[1][2][3][4]

The tower stood near where the Neverwinter River entered the city,[1][2] on its easternmost side, close to the city wall. In the 1400s DR, it was contained within a trapezoidal area filled with open parkland and trees and ringed by a fortified wall.[5] It was considered part of the city's River District.[note 2][3][4] The Many-Arrows occupation of the area saw this space filled with orc camps and barracks, as well as barricades and watchtowers.[4]

The tower was defended with many magical wards and traps in the 14th century DR.[1][2] During the orc occupation in the late 15th century DR, they surrounded the Cloak Tower with their ramshackle barricades and watchtowers constructed of logs, hides, and spikes, and erected yet more inside the tower itself. Otherwise, the orcs themselves defended the tower.[4]

The Cloak Tower of the late 15th century DR comprised several cylindrical towers of varying heights and widths, all linked to the tallest central tower via bridges. They were built of gray stone and some had a golden-hued decorative detached façade. The magical energy of the place meant some segments had separated and hovered in the air, and debris orbited its uppermost levels. This left some parts open to the elements.[4][note 3]

The levels of the Cloak Tower stretched above and below ground. In the larger towers, a central column bearing a spiral staircase supported the outer walls with flying buttresses. Illumination was provided by chandeliers hung from chains and paintings of past mages of the Many-Starred Cloak looked down from the walls.[4][note 4]

Among its facilities in the upper levels of the towers were the Apprentice Chambers, the Many-Starred Library, and the Alchemy Chamber, where magical study, research, and experimentation were carried out. All were filled with books, work benches, candelabras, crystals, and other arcane paraphernalia.[4]

Below the tower were natural caverns with winding passages, steep drops, and columns of stalactites and stalagmites. With several chambers, these were divided into three "gardens". The Azure Garden was named for the glowing blue crystals that sprouted from many of the walls; a certain piece, when struck, produced a single clear note. The Agate Garden was similar, with glowing red agate crystals instead. Between them lay the Botanical Garden held giant toadstools, gingershrooms, ferns, glowberries, winding trunks similar to thick vines, and various other green plants, all somehow growing healthily underground.[4]

Other subterranean areas were the Dark Hall and the Labyrinth; the latter was a winding, dungeon-like area, its purpose unknown and the former's chains, study stone walls, and cell-like chambers were suggestive. The last chamber was the Vault, a great circular chamber wherein massive statues of elf and human mages stood around the edges and watched over whatever had transpired there.[4]

All through the tower by 1479 DR were rough-and-ready orc-built fortifications and banners. They had also broken through several walls, smashed bookshelves and furniture, and burned paintings and books. Its age and disrepair showed in the cobwebs that hung from the ceilings and vines that grew up the walls.[4]

In the mid-to-late 14th century DR, the Cloaktower served as the meeting place and seat of power for the mages of the Many-Starred Cloak, and as their fortress when they must defend themselves.[1][2] They stood guard against the Arcane Brotherhood of the Hosttower of Luskan, who otherwise would destroy or conquer Neverwinter.[1]

Circa 1479 DR, the Cloak Tower was the base of the occupying Many-Arrows orcs under Vansi Bloodscar. She ruled her domain from the tower.[3][6][4]

The tower housed many magical treasures in the 1360s DR. In particular was the Netherese artifact known as Halavar's universal pantograph, which would magically duplicate any item placed within.[1][2] It was the size of a room and was highly complex. The Many-Starred Cloaks used it sparingly and only when the need was great, for they did not know if its power could be depleted.[1]

Little of this seemed to be left by 1479 DR. In the Apprentice Chambers was a shard of green crystal; when struck, it produced a single clear G note. In the Alchemy Chamber was a similar red crystal that produced an A note. Agate, blue, and green crystals were material components of a "crystal invocation". Similarly, a starflower was found still growing in the Alchemy Chamber, and a starflower, gingershroom, and glowberry were components of a botanical invocation. Instructions for both were found in the tower and these would produce magical treasure.[4]

The Cloaktower and the Many-Starred Cloak were well established in Neverwinter by the 1360s DR.[1][2] The mages were named for their colorful cloaks and the tower was named for them.[3][4]

However, the Cloak Tower and all the wizards within it disappeared during the Spellplague of the Year of Blue Fire, 1385 DR,[3][4] when the tower was sent to the Far Realm.[4]

About six months later, the Cloak Tower reappeared and in a different area of Neverwinter. According to a tavern tale that went around afterward, several months later, a group of thieves or bandits broke in and tried to plunder the tower. They discovered only empty rooms and no trace of the wizards, alive or dead. Only their colorful cloaks remained, still hanging on their pegs. After this, all but one of the trespassers were all slain, leaving only one survivor who claimed that the cloaks themselves had animated and enveloped everyone else. While this was unverified, the tower was avoided by all the citizens of Neverwinter for decades.[3][4]

When the forces of the Many-Arrows orc kingdom invaded the River District in the late 1470s DR, they discovered the Cloak Tower and seized it for their own.[3][6] While the Neverwintans predicted the orcs would be beaten back by the tower's magical defenses or by the cloaks, the orcs seemed to have had little trouble. Their leader, the spellscarred Vansi Bloodscar, made the Cloak Tower their headquarters in Neverwinter. From then on, the orcs could not be defeated or evicted from the district, and by 1479 DR, Lord Dagult Neverember was still working out just how. Meanwhile, orcs defended their domain against all interference and controlled the monsters that plagued the northern parts of the city, such as the plaguechanged that emerged from the sewers.[3]

Finally, in the Year of the Ageless One, 1479 DR, the Neverwinter Guard under Captain Janros waged a thorough war against the Many-Arrows orcs, using hired adventurers to disable key elements of their defenses and defeat their warband leaders. Finally, a party of adventurers directed by Scout Gaelen were able to penetrate the Cloak Tower itself. They relentlessly fought their way through the orc army and the levels of the tower and the caverns below, and slew Vansi Bloodscar and her generals.[4]

In the 1470s DR, it was home to many orcs and ogres of Many-Arrows, among the Makred the Foul, Throg the Ravenous, and Vansi Bloodscar.[4] 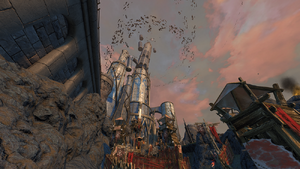 Screenshot of the Cloak Tower from the Neverwinter video game