Aarakocra, dragons, lizardfolk, birds[1]
Coliar was the second planet from the Sun in Realmspace.[1] Seen from Toril, it looked like a gray and white orb which never appeared too far from the Sun. Coliar and Anadia, the two inferior planets of the Torilian solar system, were known as the Dawn Heralds.[2]

Many astrologers of Toril believed that Coliar contained endless oceans.[2] In truth, Coliar was a gas giant enveloped by a 100‑mile (160‑kilometer) thick layer of clouds. Below this cloud cover, the entirety of the planet was transparent air and occasional clouds, dotted with countless floating islands that orbited the planet's center of gravity at vastly different altitudes.[1]

The islands varied in size, ranging from 5 feet (1.5 meters) to over 20 miles (32 kilometers) in extension, and were all uniquely shaped. They were found mainly between 50 miles (80 kilometers) and 30,000 miles (48,000 kilometers) from the center, and each island contained every land feature expected from land formations, such as lakes, rivers, hills, grass, trees, and caves. Because the islands orbited the planet's center from different altitudes, eclipses were common throughout Coliar.[1]

Built atop the topmost islands were extremely tall wooden structures that pierced the planet's top clouds and were visible from wildspace. These reinforced towers served to safely guide spelljammers arriving at the planet through the clouds to the docking ports below.[1]

Coliar was a generally warm planet, due to its proximity to the Sun. Rainstorms happened periodically on the planet, during which lightning struck the higher islands more often than the deeper ones. For that reason, the aarakocra inhabitants preferred to live on the deeper islands.[1]

Each of the three main sentient populations living on Coliar had a different government system.[1]

The lizardfolk inhabitants lived under a type of communistic rule, equally sharing all wealth among each inhabitant and with no particular individual exerting control over another. In addition, all spelljammer ships belonged to the entire population, so every inhabitant had a chance to use them. The main use of spelljamming ships was for the lizardfolk to place their eggs on them and to take them to be hatched close to the Sun, which they believed generated superior offspring. By 1367 DR, the lizardfolk director of spelljamming operations on Coliar was Schlith Darkscale.[1]

The aarakocra lived under at least 100 separate governments, all of them democratic. Leaders were chosen by votes from the entire local aarakocra community and ruled for seven-year terms. The ruler of Coliar's largest aarakocra clan around 1367 DR was Alekra Donakkis. For all family populations, all important government posts were occupied by females.[1]

The dragons kept a neutral and peaceful existence on the planet, mostly keeping to their own families, but also cooperating with each other, even across different dragon species. They also kept a symbiotic relationship with the other two populations.[1]

The main export of Coliar was its air. However, air was a difficult commodity to sell because most spelljammer ships usually just stole what air they needed.[1]

The aarakocra inhabitants also mined gems from the inner islands and exported them in exchange for weapons, which they used in their territorial disputes against the lizardfolk.[1]

The lizardfolk, on the other hand, exported aarakocra meat and feathers, as well as gems, air, and water, in exchange for spelljamming technology, which they used to power ships that would carry their eggs to be hatched close to the Sun. In order to enforce the purchasing of air and water, lizardfolk ports charged an air tax to any ships that docked at them.[1]

At the center of the planet was a very large island, inhabited by the red dragon wyrm Firebrand Flametongue. Very few people were allowed to approach the central island without being attacked by the dragon.[1]

Close to the center floated Elminster's Hideout, a metallic spherical island about 250 feet (76 meters) in diameter. It served as a hideout to Elminster Aumar.[1][4]

The planet's different cultures often used horns of voices to communicate with each other over large areas.[5] In particular, this device was fundamental in the election process of the planet's aarakocra leaders.[1]

Coliar dragons had a longer life span than dragons elsewhere. Older dragons also had the ability to use a form of shape air in order to create new bodies for themselves, which sometimes made it possible for them to travel anywhere in the universe under the form of air dragons.[1]

Other notable inhabitants of Coliar included: 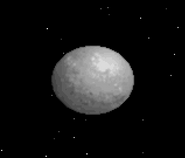 A depiction of Coliar from the Spelljammer: Pirates of Realmspace computer game.