Copper Bay was a bay in the eastern side of the Golden Water in southeast Faerûn.[1]

In the bay, the famous yellow hue of the Golden Water was diminished, and at sunset the water took on a coppery color, hence its name.[2][3] It was a protected bay.[2]

Orvyltar, the capital city of Ulgarth, lay at the far end of the bay.[1] The settlement of Halahanyl stood halfway up the northern side.[4]

Around the mid-to-late 14th century DR, Copper Bay was Ulgarth's safest and biggest port, with its capital sitting on its shore. The majority of the kingdom's trade came through here, so commercial sea traffic in the area was dense. Almost two dozen warships and other defenses defended the bay and its ports.[2][3] 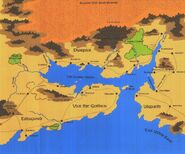 A map of the Shining Lands marking Copper Bay.
Add a photo to this gallery
Retrieved from "https://forgottenrealms.fandom.com/wiki/Copper_Bay?oldid=325240"
Community content is available under CC-BY-SA unless otherwise noted.