6 in (15 cm)[4]
Cranium rats were psionically enhanced rats, transformed by mind flayers through bombardment with psionic energy. They were used as spies by illithids, interspersed through the normal rat population of a city.[1]

Cranium rats were indistinguishable from regular variants of their respective species save for their enlarged and exposed brains. It was possible for these brains to emit light.[1]

When isolated, cranium rats behaved like ordinary rats, using their telepathy to communicate basic feelings like hunger and fear. Even in this state they were still significantly more intelligent than normal vermin.[1]

When forming a swarm, however, the collective intelligence of the rats was combined into a single entity. The more cranium rats in a swarm, the more intelligent the swarm would become, with an average-sized swarm of rats holding an unnerving level of intelligence. Cranium rat swarms spoke in the collective, using "us" and "we" as opposed to "I" or "me". Rats separated from the swarm lost access to their psychic powers but did not suffer an immediate intelligence drop; instead, they gradually lost their boosted intelligence over the course of several days. This loss was immediately reversed when they swarmed again.[1] These dangerous entities were not normally violent unless ordered to attack―their usual role was reconnaissance.[4]

Alone, cranium rats were weak and cowardly, with no more offensive ability than an ordinary rodent. They were able to generate light using whatever weak psionic powers they possessed, and were immune to having their minds read.[1]

When in a swarm, cranium rats could access enhanced psionic abilities similar to spells, implanted by their illithid masters. So long as enough cranium rats existed in a single area (approximately thirty) they could wield these abilities to achieve a variety of effects. Cranium rat swarms could use these abilities to attempt to read the minds of their targets, or decipher written and spoken words. They could also attempt to control the minds of creatures at will, although such a method was limited to simple orders. With more effort they could try to mentally dominate their enemies for up to an hour or scramble their minds, although both of these were strenuous enough that they took a day to recharge. If their mental powers proved ineffective, they were also capable of simply swarming their targets like regular rats.[1]

Cranium rats did not conduct direct attacks, but would ambush an opponent when they were walking somewhere or asleep. If they could not kill a target quickly, they scattered, splitting their intelligence and making the entity responsible practically impossible to capture. They also dispersed when attacked, rather than fighting back.[4]

Beyond the Prime Material plane, cranium rats could be encountered within some of the worst parts of the city of Sigil.[5]

Cranium rats were used as spies for mind flayer colonies. They infiltrated surface communities and read the inhabitants' thoughts, later transmitting them to the elder brain. If a few rats escaped the range of the elder brain's connection, it and its servants were unconcerned as new ones could be created at will.[1]

Cranium rats were sometimes employed as familiars by warlocks and wizards.[6]

Cranium rat biology was similar to normal rat biology, although they ate a greater amount of meat. It was unknown if reproduction created regular or cranium rats. For one reason or another, cranium rats did not gather into dense groups, possibly because such a group would ascend to a higher level of being, or that such overpopulation was too inefficient to accomplish anything.[4] 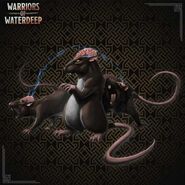 A depiction of cranium rats as they appeared in Warriors of Waterdeep.