The Crown of Horns was an evil, intelligent artifact of great power.[citation needed] Forged by Trebbe, a Netherese arcanist,[1] and later enhanced by Myrkul, the former god of Death,[citation needed] it carried with it a long history of corruption and tragedy.[1][2][citation needed]

After its destruction and subsequent reformation, the Crown of Horns appeared as a silver circlet with a black diamond set on the brow and four bone horns mounted around its edge.[citation needed]

It is unknown what powers the artifact had before it was possessed by Myrkul other than its sentience and its capability to interfere with the minds of its wearers. After its possession however, the Crown imbued the wearer with several considerable necromantic powers—including the unique "Myrkul's Hand" property—but had a tendency to strongly influence that action of the wearer, changing his or her alignment to neutral evil and gradually making him or her into an undead creature, among other things.[citation needed]

The Crown of Horns was originally designed by the Netherese archwizard Trebbe, the founder of the flying Netherese enclave Shadowtop Borough. In −2237 DR, while working on the Crown, it exploded, killing Trebbe and destroying a block of the enclave. The Crown itself wasn't destroyed, but it was lost.[1]

In −1423 DR, the Crown was seen again, this time in the hands of another archwizard, Requiar. Requiar used it to slay 30 other archwizards and conquer Shadowtop Borough. The artifact drove Requiar mad though and he was rendered incapable. After the insensate arcanist was overthrown, his killers searched for the Crown but despite powerful divinations, a thorough search of the city, and many parties of adventurers scouring the Eastern Forest over the next 150 years, they failed to find it.[1]

In −644 DR, the Crown was finally rediscovered by the archwizard Shadelorn. Shadelorn was working on a project to succeed where Ioulaum had failed in creating an improved mythallar. In −342 DR, another archwizard, Shenandra, was working on countering the lifedrain magic of the phaerimm at the same time. As misfortune would have it, the two successfully completed their projects at precisely the same time on Shadowtop Borough. The Crown, wanting revenge on the city for its previous defeat, had been imperceptibly corrupting Shadelorn's work and when he activated his new mythallar, it drained all magic and memorized spells from everything and everyone within a 20-mile radius. The enclave fell, its inhabitants died, the threat from the phaerimm persisted and the only thing to survive intact was the Crown.[1][2]

At one point, the Crown was in the possession of the Netherese lich Aumvor the Undying, who wished to use the crown to make Laeral Silverhand his bride by leaving it for her adventuring band, The Nine, to find. Laeral donned the crown in 1337 DR but Aumvor's plot failed when the Crown's powers conflicted with Laeral Silverhand's spellfire power and drove her into madness.[3][4]

The Crown was sundered by her future consort, the archmage Khelben "Blackstaff" Arunsun, who locked its pieces away within the heavily protected walls of his tower, Blackstaff Tower. However, when Myrkul died at Midnight's hand during the Time of Troubles, the god tore the broken shards of the Crown from Blackstaff Tower, reforged it into a new shape, and infused it with the remains of his sentience before teleporting away.[5] 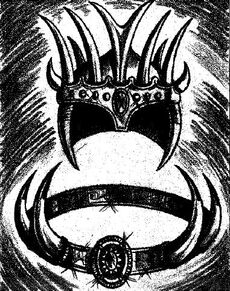 Myrkul, through the Crown, continued to spread evil through the Realms, tormenting members of the Church of Cyric as well as hapless innocents, avoiding allies of Khelben and temples of Mystra.[citation needed]

The Crown of Horns was seen in the possession of a yuan-ti pureblood named Nhyris D'Hothek in 1370 DR,[5] who disappeared from his haunts in Skullport after the Crown transformed him into a lich. People and creatures who have remained dedicated to Myrkul, or who have become dedicated to him since his demise, devoted themselves to him through the Crown of Horns by touching it and were known as Horned Harbingers – Nhyris included.[citation needed]

Following the fall of Netheril, a group of surviving arcanists fashioned the helmet The Black Hands of Shelgoth out of the remains of the lich Shelgoth. Later historians speculated that this was an attempt to create an item similar to the Crown of Horns.[6]

Retrieved from "https://forgottenrealms.fandom.com/wiki/Crown_of_Horns?oldid=520922"
Community content is available under CC-BY-SA unless otherwise noted.