The Crown of Neverwinter was a magical crown and a symbol of power of the Alagondar royal bloodline, the rulers of Neverwinter.[1]

The Crown of Neverwinter was a warrior's king crown made out of mithral inlaid with four sapphires.[2]

The Crown of Neverwinter had the property to protect its wearer from extreme temperatures of cold and heat, and could magically enhance the majesty of the wearer, giving its wearer an advantage when talking with or intimidating someone. The Crown could also emit a burst of cold and heat to damage the wearer's enemies.[1]

Only those of the Alagondar bloodline could wear the Crown of Neverwinter. If someone who wasn't a descendant of Nasher Alagondar donned the Crown, the individual would be destroyed by a burst of cold and heat.[1]

In 1478 DR, Seldra Tylmarande got a replica of the Crown of Neverwinter (although, at the time she believed it was the real one[3]), and used it in her bid to claim the throne of Neverwinter. This false Crown was magically tuned to Seldra, and if someone other than her donned it, they would suffer ice and fire damage. This was done to match the legend of the original Crown and lend credence to Seldra's claim.[2] The false Crown also had the property of enhancing the power derived from spellscars.[3]

The false Crown was stolen in 1479 DR by a Red Wizard named Tolivast, who cursed it to make the wearer go mad in an attempt to use the fake Crown (which he believed was the original) to advance the Thayan's agenda in Neverwinter.[4]

The original Crown of Neverwinter was lost during the Ruining of 1451 DR.[2] Some believed the Crown was hidden in a secret vault in Castle Never,[5] but only the ghosts that haunted the place knew for sure.[6]

In 1478 DR, some noble from Waterdeep commissioned the creation of a false Crown of Neverwinter with unknown purposes, although it was later believed that it was done to foil Dagult Neverember's efforts to claim the rulership of Neverwinter. Seldra Tylmarande obtained the false Crown shortly thereafter.[3]

In 1479 DR, Seldra's false Crown was stolen by the Red Wizard Tolivast, but it was retrieved by a group of adventurers.[7] Seldra later used the fake Crown to try and take control of the city, by using the persona of the "Lost Heir of Neverwinter".[8]

The Crown of Neverwinter was stored in the vaults beneath the Hall of Justice. Although Neverember had the Crown at his disposal, he didn't wear it, something polemical among the different factions of the city.[9][note 1]

Taking advantage of the chaos in the city during the Siege of Neverwinter, members of the Nashers managed to sneak into the vault and steal the Crown. The Heroes of Sleeping Dragon Bridge were able to locate the thieves, who pointed out their leader, Karzov. The heroes followed and killed Karzov, bringing the Crown back to the Protector's Enclave.[9]

Some years later, the leader of the returned members of the Many-Starred Cloak, Gyrion the Ascendant, claimed to wear the Crown and was therefore the true ruler of Neverwinter,. However, the heroes discovered this to be a deception, as the Crown was still locked in the vaults beneath the Hall of Justice.[9]

An adventurer holding the Crown of Neverwinter 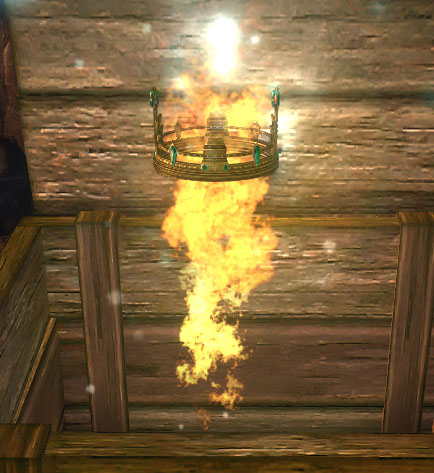 Retrieved from "https://forgottenrealms.fandom.com/wiki/Crown_of_Neverwinter?oldid=439728"
Community content is available under CC-BY-SA unless otherwise noted.