Cult of the Black Earth

Fane of the Eye, Dessarin Valley[1]

Cult of the Crushing Wave

Cult of the Howling Hatred

The Cult of the Black Earth was a cult devoted to Ogrémoch and one of the four cults responsible for the Elemental Evil crisis.[2]

The earth cultists were fascinated by the implacable strength and unyielding resistance of elemental earth. Their main goal was to obtain the power to eliminate all kinds of civilization using landslides, sinkholes, or mighty earthquakes, thus demonstrating the true power of elemental earth and the futility of resistance. Earth cultists saw mines, quarries, and tilled fields as injures upon the living rock and soil. They believed that the earth craved the blood of those who didn't venerate it before all other powers and beings.

The Cult of the Black Earth usually recruited those who drew their fortunes from the earth, whether directly or indirectly. In locations where the influence of the cult was great, animals and monsters that lived or burrowed in the ground tolerated and even submitted to the cultists. Even creatures usually too stupid and ravenous to be trained, such as ankhegs or bulettes, served the Black Earth. The monsters allowed themselves to be herded or ridden into battle against the enemies of the cult.[3]

The Black Earth cult was noted as the most defense-minded and patient of the four elemental cults. Earth cultists' main personality traits were stoicism, endurance, and unyielding resolve. They usually took their time to ponder a situation before beginning any new enterprise, gathering their strength and considering their plans. Once earth cultists decided to act, they were inflexible and persistent and overtook any obstacle or unforeseen development. They showed a single-minded attitude to the extreme, not caring even for social niceties. Most earth cultists saw common courtesy as an obstacle created by weak people to put limits on the behavior of the strong, and they saw empathy or friendship as a sign of weakness.[3]

The modern earth cult began when Marlos Urnrayle recovered one of the four elemental weapons crafted centuries before by the drow archmage and Elder Elemental Eye cultist Vizeran DeVir.[4]

All their work culminated in 1491 DR at in the Fane of the Eye, under the ruined dwarven city of Tyar-Besil. Working simultaneously with the other three elemental cults, the earth cultists tried to summon Ogrémoch to Toril using members of a missing diplomatic delegation from Mirabar and other captives as sacrifices.[5] 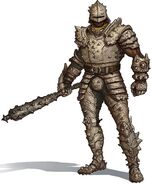 Depiction of a Black Earth guard, the warriors of the Cult.
Add a photo to this gallery

Retrieved from "https://forgottenrealms.fandom.com/wiki/Cult_of_the_Black_Earth?oldid=556631"
Community content is available under CC-BY-SA unless otherwise noted.