The Nation of Pain[8]

Dambrath was a nation on the southern coast of Faerûn. It was notable as it was formerly ruled by a race of human, half-drow collectively known as the Crinti, who comprised the upper class. It was a predominantly isolationist nation, though they did allow some limited trade with outsiders.[9]

Dambrath was unbearably hot throughout the entire year, with relief only coming during the rainy season, which lasted from Uktar to Hammer or Alturiak. However the Gnollwatch Mountains would gather rain for many months of the year and snow during the colder months, despite being a low-altitude mountain range.[9]

The region south of the mountains had sweltering days combined with a cool, refreshing night (thanks to the cool air from the Great Sea. The Forest of Amtar was as dense and humid an area as the jungles of Chult to the far west of the continent.[9]

Even worse, in the regard of heat and humidity, was the noxious swamp of Rethild along the Dambrath's southwest coast. Decaying organic matter and residual magic in the earth caused toxic vapors to bubble out from the murky waters. These fumes stream together to form clouds of earth-toned, poisonous gases that waft through the swamp. They have been known to cause cackle fever and mindfire.[11]

Dambrath stretched more than 700 miles east to west, and 300 miles north to south. The nation was bordered roughly by Halruaa's East Wall mountains to west, the Forest of Amtar to north (though most of the populace lived south of the Gnollwatch Mountain and Hills of the Dead Kings), the Great Sea to the south, and Luiren and the Lluirwood to the East.[9]

The local wildlife and plant-life varied heavily as Dambrath had a number of distinct biomes. The great open plains north of the Gnollwatches were filled with tall grasses and sporadic sentient inhabitants. It was a rich breeding ground for horses, and some of the finest equestrian mounts in all of Faerûn came from ranches in this stretch of land.[9]

The Gnollwatch mountain range was dotted with pine and shadowtop trees and, as the name suggests was home to a number of tribes of gnolls. A more dangerous threat of a handful of hill giants lived in these peaks, with the apex of the mountains serving as the home of storm giant family.[12] The Hills of the Dead Kings, which extended off the eastern arm of the mountains, had sparse vegetation and few trees. Its eastern slopes however were home to a number of halfling villages, likely migrants from nearby Luiren.[11]

The Forest of Amtar was a dense, somewhat tropical forest of suthwoods that extended for miles, with groves of shadowtop and pines interspaced. Underneath the canopy is a thick undergrowth of tangled vines and ivy that was rife with insects of all kinds. The native wild species include boars, tigers, leopards, reptiles including lizards and giant snakes as well as a number of primates like monkeys, gorillas, dire apes and girallons. Most notable were the tribes of wild elves known as the Trunadar, living in the southern half of the woodlands.[11]

The Great Swamp of Rethild was a dark sweltering bog of moss-covered cypress and blackwood trees, with magical plants like shambling mounds. Endless swarms of deadly insects would buzz through the fetid fog and along the swamp floor. Giant toads, snakes and leeches were among the creatures that populated the swamp, along with intelligent species like bullywugs, tasloi, nagas and tribes of lizardfolk.[11]

The Bay of Dancing Dolphins was full of a wide variety of sea life including swordfish, sea bass, snapper and the eponymous dolphins who would dance in a coordinated routine every evening at dusk. Deep between the waters were a hidden city of Triton.[13]

Criosphinxes were known to live in the frontier lands of Dambrath.[14]

In the centuries of rule under Reinhar I and his descendants, Dambrath was a human-centric nation focused on conquest and war with neighboring countries.[5] They were known for being expert riders, and had deep connection with the horses of the Dambrathan plains.[15]

During the reign of the Crinti, Dambrath was a segregated and isolated matriarchy, leading the surface nation on behalf of the Drow in the Underdark. The church of Loviatar held an interesting alliance with the dark half-elves.The Crinti consolidated power and authority in the central, more populated, urban areas of Dambrath. Military service was an honor to the nobility,[16] and the army was used to quell shebali uprisings, enforce the nations isolationism and defend from foreign nations.[6]

Dambrath was a country wealthy in a few, specific, unrelated goods; breeding horses, silver mined from its mountains and pearls from the Bay of Dancing Dolphins. Minor exports from the nation included products made from the trees from the Amtar Forest, including arrow shafts, chairs, tables and other finished wooden goods. The area was also known for its fruit orchards and wealth of fish species from the bay.[16]

The horses that had been captured, tamed and bred, from the great plains north of the Gnollwatches, were prized around Faerûn and in lands as far away as Zakhara. One of few ways the Arkaiun people could make a good living during the rule of the Crinti was by operating an independent horse ranch in the plains, far from the centralized cities of the half-elves' society.[6] This lifestyle had been a part of the Arkaiun people for hundreds of years before their subjugation.[15]

The land was also extremely rich in silver, found deep in the Gnollwatch mountains. The mine owners in that region formed several consortiums to maximize profits and utilization of the precious metal. Another prized mineral came in the form of stunning pearls. Many divers would submerge in the bay's waters for the wealth of easily-accessible oyster beds. This was also the only location for the rare Dambrathan pearl, easily worth seven to ten times the value of the standard variety.[6]

The Crinti maintained an isolationist policy with their kingdom, but ensured that trade was vigorous.[16] The majority of the trade came in through sea, but caravans regularly came in from Delzimmer along the Trader's Way. These traders could travel no further into the country than Cathyr, and as such the large port city of Maarlith only had visitors via the Great Sea. Non-drow elven traders, or any other profession for that matter, were completely banned from the country.[6]

The faith of Loviatar was the official religion of Dambrath after the death of Reinhar IX by the hands of their Priestess. Since the takeover by the Crinti, every major city has erected a temple to the Maiden of Pain, and her sadistic tenets found their way to most aspects of daily life. Despite it being the state religion of the Crinti, not everyone in Dambrath chose this deity for worship.[6] Most full-blooded, surface drow worshiped Lolth with a few who prayed to Eilistraee while many of the isolated outcasts of the Swagdar prayed to the beastlord Malar. Due to these deities' relationship with Loviatar, the Crinti church tolerated their practices.[5]

The recorded history of Dambrath began with the Nar, an ethnic group who fled the city of Shandaular via a portal in −946 DR. The portal opened up into the Council Hills in the Eastern Shaar, where they would live for over 1000 years, calling themselves the Arkaiun people. After this time they were pushed south by invading forces, eventually settling in the coast north of the Bay of Dancing Dolphins. In the following centuries the Arkaiun were united by the Warrior-King Reinhar I; his kingdom of conquest would expand as as far as Luiren and Halruaa[5] and last until 9th century DR.[17]

The reign of the Crinti began with the discovery of silver in the Gnollwatch mountains. Delving too greedily and too deep unearthed the city of T'lindhet, whose drow inhabitants thought they were being invaded. The drow invasion of the surface culminated in the Battle of Crimar in 831 DR, that saw the death of Reinhar IX and an alliance form between the dark elves and the church of Loviatar. Thus the reign of Queen Cathyr began, and a centuries of matriarchal regicide would follow for the next 400 years, with another century of peaceful succession after that.[17]

After centures of Crinti rule, native human Dambrathans rebelled against their half-drow masters and drove them from the land in 1385 DR.[7] In 1489 DR[18] Dambrath was a nation of nomadic human clans, primarily horse riders. The clans met two times a year at The Hill of Kings to add the stories of the clans history to totems on the hill. Many of these Dambrathens sought the curse, or gift in their eyes, of lycanthropy. This was acceptable because of the local gods they served. The Dambrathans worshiped Silvanus, Selûne, and Malar all patrons of were-creatures. [19] 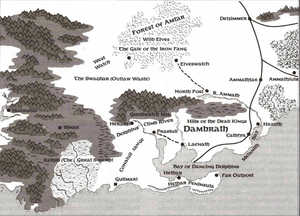