Dragon #98
A dark naga was a naga subspecies that looked like a large purple snake or eel with a barbed stinger at the end of its tail and a human face. Dark nagas could speak Common and Infernal. They liked to plot with other sinister creatures so that they could gather wealth more easily.[2]

Dark nagas measured approximately 12 feet long and weighed about 300 pounds. Their scales were dark blue or purple, often with black frills or scale patterns. The body of a dark naga was more similar to that of an eel rather than a snake. Its tail ended in a poisonous stinger.[citation needed]

Their veins contained an oily black[5] or dark brown gore.[6] The naga poison, or venom, was a thick black viscous fluid that dripped from the tail singer's venom canal when agitated.[6]

Dark nagas craved power and wealth. They loved using their magical powers and the treasures they found in ancient ruins to rule those who were weaker than themselves.[citation needed]

Dark nagas would attempt to use high terrain to their advantage to stay out of the reach of their enemies.[2]

They could cast sorcerer spells and their stings carried a poison that could induce a nightmarish sleep. They were resistant to all charm effects and had the permanent ability to detect thoughts. Similarly, their own thoughts could not be read.[2]

The Zhentarim were known to use dark nagas as mentors and leaders for bands of orcs.[7] Dark nagas also worked as divine servants of the duergar goddess Deep Duerra.[8] 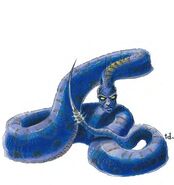 From left to right, a dark naga, a guardian naga, a primordial naga, and a bone naga.

The lich Druth Daern deceiving four dark nagas with an illusion of the god Ssharstrune as a ghost. 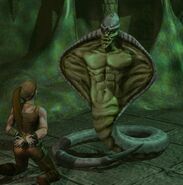 A dark naga and its prisoner. 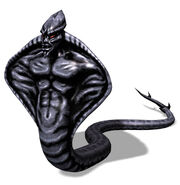