14 ft (4.3 m)[1]
Deepspawn (sing & pl) were monstrous aberrations that could spawn many other varieties of monsters.[1]

Deepspawn looked like large, rubbery spheres of mottled grey and brown. Six arms projected from their bodies; three were tentacle-arms, and three were jaw-arms, ending in mouths of many teeth. A deepspawn also had over 40 long, retractable, flexible eyestalks, but it extended only three or four at a time, well away from harm.[4]

For a deepspawn to give birth to other monsters, it first needed to devour one. It made an exact "record" of the creature and replicated the creature using ingredients from the surroundings. If the deepspawn could claim resources from the dead and dying on a battlefield, it could produce a new spawn every three days. Typically, it gathered materials from the wild and could only produce offspring at a much slower rate.[5]

Only exact duplicates could be created by a deepspawn. They had an intense, inborn loyalty to the parent. They were sent away to live on their own unless there was sufficient food in the area to support them. There were typically one to four spawns kept around as general servants.[citation needed]

In the month of Eleasias in the Year of Larks, −183 DR, Darrom Ithal, the first king of Tethyr, was assassinated by the teleportation of a deepspawn directly into his throne room. This had been orchestrated by Amir Tarseth, the king's brother-in-law and leader of Clan Tarseth.[6]

During the Tethyrian Interregnum, a deepspawn known as The One Below laired below the surface of the city of Zazesspur. On Mirtul 3, during a time period known as the Days of Terror, Zaranda Star and her Star Protective Services slew the monster and ended its chaos.[7] It had been allied with the Twisted Rune and a tanar'ri.[8]

After that deepspawn's death, a second deepspawn, known as Clusterfang, joined the Rune and took residence under the city in its predecessor's place.[9]

In the mid-14th century DR, the mad wizard Radoc had a deepspawn in his forces that helped him to spawn many mongrelfolks, trolls, and other types of monstrous minions.[10] In 1367 DR, having gotten word that his foe Grintharke had fallen, Radoc took the deepspawn and his other forces to assault Hellgate Keep.[11] During this siege the deepspawn crawled underground and hid itself within an underground cave, close to the Chambers Below.[10]

After the siege on Hellgate Keep had failed, that deepspawn remained within this cave. Sparingly using his forces against the Keep's ruler, Kaanyr Vhok, and rallying his forces against him. It's actions soon came to the attention of the cambion, who proceeded to engage in many negotiations with the deepspawn that were half-hearted, for neither was willing to be subservient to the other. Some time after the Keep's destruction in 1369 DR, Vhok and his men slew the deepspawn's minions, injured it, and stole its accumulated treasures before caving in its lair. The deepspawn managed to survive this, subsisting off of spiders, worms, and the trolls it would spawn.[10]

Some claimed that a deepspawn dwelled within the jungle of Jundarwood, though throughout Faerûnian history deepspawn were often a source of blame for strange happenings.[12]

Some hunters and sages in the Border Kingdoms voiced suspicion that Bloutarrans may have installed a deepspawn within a cave in the forest north of their town, for it seemed that those townspeople always came back from a stag hunt with two or more prizes in hand.[13]

Around 1479 DR, it was rumored that the farmer Nars Thormil, who lived near Wheloon in Cormyr, used a deepspawn he had captured to duplicate thimdrors and sell them to the best eateries in Saerloon and other nearby settlements.[14]

An image of a deepspawn originally intended for publication in Player's Guide to Faerûn.

Adventurers battling a deepspawn from the cover of Races of Faerûn.

Deepspawn and its trolls under the Hellgate Keep. 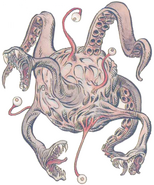 A depiction of a deepspawn.

Beautiful Flower deepspawn who resided in the Crypt of Orbakh.