Forgotten Realms Wiki
Register
Don't have an account?
Sign In
in: Inhabitants with a 26 challenge rating (5e), Controllers of 42nd level (4e), Controllers (4e),
and 22 more

Edit
watch 02:09
What are Demogorgons?
Do you like this video?
Play Sound

listen) was a powerful demon lord and lesser deity from the Abyss.[12] He was known to most as the Prince of Demons, and was referred to as the Imprisoned One by some followers of Helm,[5] and Leemooggoogoon the "Deep Father" by some kuo-toa.[2] The self-proclaimed title as Prince of Demons was won by virtue of power and influence; many demons challenged it but none could defeat Demogorgon and claim it.[7]
“
Know me then by my best name, mortal. You face Demogorgon, Prince of Demons.
”
— Demogorgon[15]

The demon towered a full 18 feet (5.5 meters) in height,[1] his body at once sinuous like that of a snake and powerful like that of a great ape. Two baleful baboon heads, with blue and red faces similar to those of mandrills,[1][16] leered from atop his lumbering shoulders, from which two long tentacles writhed. His lower torso was saurian, like some great reptile with blue-green, scaly skin. He had an immense forked tail.[1]

“
Demogorgon is his own worst enemy. He is, in many ways, two creatures that share the same body. Aeumal, his left head, is the more charismatic and calculating while Hethradiah, his right head, is more impulsive and feral. Each views the other as inferior and each believes the other incapable of outfoxing itself.
”
— Shami-Amourae, former aid of Demogorgon[17]

Each of Demogorgon's heads had its own name and personality, a duality that created an enduring internal conflict of his personality, while shaping all his actions and even his realm.[18][19] His left head was named Aameul while the right was named Hethradiah (sometimes referred to as Hathradiah).[3][6] The two heads warred with each other, constantly seeking to obtain the upper hand on each other. Aameul, the more charismatic and calculating, relished deception and wished to break free from the other half. The more impulsive and feral Hethradiah relished destruction and did not wish to be separated.[7][18][20]

Perhaps the only thing preventing Demogorgon from taking over the rest of the Abyss was his own dual nature.

“
If you want to have even a chance at stopping him, you need to distract him. That is Demogorgon's weakness. Each situation he faces brings two reactions, not one. And when faced with danger across multiple fronts, these reactions can paralyze him.
”
— Shami-Amourae[17]

Despite this internal madness, Demogorgon was extremely creative and relished experimentation and innovation.[18]

Demogorgon preferred to avoid direct conflict, instead using magic to help his servants.[18] Demogorgon could hypnotize with a gaze[1] or drive creatures around him to terror and insanity just at the sight of him.[21] His whip-like tail had the ability to drain the life energy right out of a living foe. His tentacles inflicted a withering disease that caused living creatures to rot away in an effect similar to that of cause disease. Rotted limbs and bodies could only be cured if spells such as remove disease were cast very quickly.[1][12] He was extremely resistant to magic.[22]

“
I studied Demogorgon's symbol. I thought that, by looking at it through a mirror, I might avoid its effects. If anything, viewing its reflection made its effect more potent and more subtle. It was Rary who saved me, and I thought he had been spared the symbol's effects. I don't have many regrets, but underestimating that symbol is one of my greatest.
”
— Mordenkainen[23]

Demogorgon lived on the 88th layer of the Abyss, known as the Gaping Maw. This was a layer consisting of a great sea of briny water broken by tall, sharp, ugly, rocky promontories. Demogorgon's palace, called Abysm, consisted of two twin towers roughly shaped like tightly coiled serpents, crowned at the top with skull-shaped minarets. The two towers were linked by a bridge near the top. Most of the fortress lay underwater beneath the towers.[18] The reefs and caverns near the fortress were home to aboleth, kraken, and ixitxachitls, which constantly warred with each other and worshiped Demogorgon in his palace above.[24]

Demogorgon also kept a fortress in the bog of the Gaping Maw called Ungorth Reddik. This was where he housed his armies of hezrous, aboleths, scrags, skum, and ichythoid creatures. The fortress was guarded by unusual retrievers, golems, and other evil constructs.[18] Demogorgon was also served by abyssal marauders.[7]

The only significant landmass of the layer was a vast continent covered in tropical jungles. Here, Demogorgon's capital city of Lemoriax was located.[19]

Demogorgon conducted several experiments in his realm. He was credited with the creation of retrievers[10], ettins,[7] khaastas,[25] and with the turning of the first ever death knight,[26] St. Kargoth.[27] He also invented a plague known as scalepox cloud, a series of clouds of mist that roamed both Gaping Maw and the guttering Grove.[28]

“
The dual-lived, dual-willed prince of the Abyss, master of the mysterious and king of the deviants, Demogorgon, you are my lord!
”
— Qill, half-elf cultist of Demogorgon.[4]

Demogorgon's cult was relatively small compared to "true" deities, but much larger than those of most fiends. He was worshiped by the intelligent manta ray race known as ixitxachitls, who drew power from the Abyss itself in order to become more powerful spellcasters. In turn, vital energy drained by vampiric ixitxachitls was transferred directly to Demogorgon via an unknown Abyssal mechanism.[12]

Demogorgon's other worshipers included troglodytes, kuo-toa, and other humanoids, particularly evil humans. His cult prospered in times of chaos and caused great destruction wherever it was found. Temples to Demogorgon were split in half, with one side representing Aameul and the other representing Hethradiah.[7] Demogorgon's domains were Chaos, Corruption, Demonic, and Evil.[10] His symbol was that of a forked tail, often wrapped around a skull or sword.[18]

Demogorgon was sufficiently powerful to offer patronage pacts with warlocks,[29] who usually kept quasits as familiars.[30] His most devout followers were granted magic boons, such as an aspect of his dual minds that conferred resistance to mind-affecting effects. Their signature spells mimicked Demogorgon's own abilities, such as charm person, enlarge/reduce, and vampiric touch.[31]

The hatred between Orcus and Demogorgon was legendary.[7][1] He was also a dedicated foe of Graz'zt[7] and had unsuccessfully attempted to conquer Fraz-Urb'luu's realm.[20] He hated Sekolah and encouraged his followers to kill sahuagin.[12]

Demogorgon was allied with the obyrith lord Dagon,[33] who often advised the heads of Aameul and Hethradiah separately. Dagon provided intellect, while Demogorgon provided brute strength.[7] He was also frequently visited by Zuggtmoy, who exchanged fungi at Gaping Maw and engaged with Demogorgon in several discussions. He was also allied with Ilsidahur, lord of bar-lguras.[20]

Demogorgon's romanatic interests included the succubus Shami-Amourae and the Succubus Queen Malcanthet, both of whom had manipulated him for their own benefits. Shami-Amourae, however, was imprisoned in the Wells of Darkness for her manipulations.[34][20] He was the brother of another demon lord called Mandrillagon.[35]

The balor Belaphoss considered himself to be the most powerful of Demogorgon's servants.[36]

There were conflicting legends about the origin of Demogorgon. One account claimed that he was the first of the tanar'ri, who originated out of the consolidated fear of mortal souls, shortly after the obyrith Obox-ob was defeated by the Queen of Chaos. Cast aside as a deformity with his boneless arms and twin heads, Demogorgon lay hidden while the Queen of Chaos used sibriexes to better shape other primal mortal emotions into more refined tanar'ri.[20]

Another legend claimed that Demogorgon was originally a primordial and the first of his kind to set foot in the Abyss shortly after the formation of the plane, followed closely by Dagon, who challenged him for control of the plane. As he and Demogorgon fought, Obox-ob seized the opportunity to become the first Prince of Demons. A temporary alliance between Demogorgon, Orcus, and Baphomet was formed to defeat Obox-ob.[8]

According to this second legend, Demogorgon once had a single head until a blow from Amoth split it in two.[7] Soon after that battle, Demogorgon defeated the stone primordial Storralk. He kept Storralk beneath his throne, torturing him for eternity through a ritual that created the ettins from Storralk's blood and linked them to his body. Every time an ettin felt pain, that agony was transferred to Storralk.[7]

In both accounts, Obox-ob had since vowed to murder Demogorgon and reclaim his title.[37][20]

Following the defeat of the Queen of Chaos at the hands of the tanar'ri, the leading demon lords Graz'zt and Orcus then competed for the title of Prince of Demons. At that moment, Demogorgon, who had grown stronger during his exile, launched a massive assault throughout the plane to crush his rivals' forces. After he slew a dozen demon lords, draining their life forces with his tentacles, even Graz'zt and Orcus were forced to kneel. Thus, Demogorgon asserted his position as Prince of Demons.[38][20]

At one point, Demogorgon and Dagon worked up an alliance of sorts, given the proximity of the Shadowsea to Gaping Maw.[33]

Over a millennium before the Era of Upheaval, Demogorgon was shackled and imprisoned in Faerûn. within the fortress of Watcher's Keep in Tethyr.[5]

During the Time of Troubles, the magic maintaining Demogorgon's prison began to fail.[5] The Prince of Demons was fully aware of the presence of Gareth Dragonsbane and his allies when they descended into Abysm that same year.[39] In response, Helm himself tasked an order of his knights to maintain the magic that kept "Imprisoned One" from escaping into the Prime Material plane. After some time the magic would expire, and members of the order would venture deep within the keep to complete the ritual that would sacrifice their life in order to restore the magical seal.[5]

In the Year of the Gauntlet, 1369 DR, Odren and the knights sought to break the cycle of sacrifice their order undertook. The Knights of the Vigil petitioned the famous adventurer Abdel Adrian and his companions to perform the ritual in place of the knights and keep Demogorgon sealed away once again. While it was unknown if the ritual was performed again, Demogorgon was not sealed away forever and at some point returned to the Abyss.[5][40]

On Nightal 15, 1486 DR,[41] Archmage Gromph Baenre weakened the barriers of faerzress, inadvertently "summoning" Demogorgon and allowing him to pass from the Abyss to the Prime Material Plane. He arrived at the tower of Sorcere in Menzoberranzan and cut a swath of destruction as he exited the cavern.[40] Gromph was able to weaken the faerzress because of his study of psionics and the psychic conveyance of a plan devised by the goddess Lolth.[42]

In 1487 DR, Drizzt Do'Urden defeated Demogorgon in Menzoberranzan by acting as a conduit for a barrage of magical energy, released upon him and held by the kinetic barrier of an illithid hive-mind.[43]

In the late 15th century DR, as a result of a vision of the demon lord in the Darklake, a faction of the kuo-toa of Sloobludop started a cult of Demogorgon.[2]

Some myths concerning Demogorgon's past suggested that his hatred of Sekolah was earned during a time he spent as Sekolah's vassal, forced to do his bidding under the power of an artifact.[12]

“
I still possess the Iron Flask of Tuerny, holding a portion of Demogorgon’s primal animus. […] Yes, perhaps it is time to reach out to the Prince of Demons and tempt fate once more.
”
— From the Demonomicon of Iggwilv[44]

Demogorgon was originally based on a demon of the Underworld from late Antiquity and Medieval legend.[45] 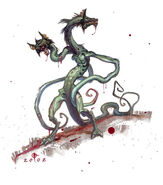 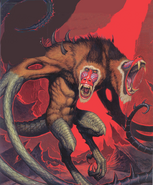 Out of the Abyss cover.