Dethek is a Featured Article! It is one of the best articles created by the Forgotten Realms Wiki community.
However, if you can update it or think of a way to further improve it, then please feel free to contribute.
This article is about the dwarven script. For the dwarven language, see Dwarvish.

Dethek was the name of a runic script used by the Dwarvish language,[2][3][4][5] as well as some human languages,[5] and by the giant, ogre, orc, gnome, goblin, and terran languages.[6] It consisted of letters, numerals and symbols for common words or phrases.[2][3][4][note 1]

"Dethek" was also sometimes used to refer to the Dwarvish language as a whole.[7]

The Dethek runic alphabet consisted of 24 characters. The sounds "w", "x", and "z" were represented by the same character.[2][3][4][5] This might have been confusing for humans trying to translate into Common. It was not an issue for native Dethek users, as few words in those languages had these letters.[citation needed] [note 2]

The Dethek method of counting used a collection of straight lines, joined together to create a number. This means that each number appeared as a single character. The characters for 1 and 5 were combined in various logical ways to create the numbers 1 to 9:

Numbers from 20 to 99 could be created using logical combinations of the 1, 5, and 10 symbols:

Clans and tribes and some of the most common words, races, or phrases had their own symbols.[2][3][4] These were useful for sign-posting or creating runestones.[3]

Each of the main races in Faerûn had a collective symbol assigned to it. The symbol applied to both singular and plural, leaving the reader to work it out from context:[3]

Other symbols were used for tracking and signposting. These were hieroglyphics based on commonly understood concepts: a foot to mark a safe trail, an inverted helm or drinking horn to indicate fresh water, and so on:

Dethek was extremely lacking in punctuation.[2][3][4][5] This was probably due to the fact that dwarves rarely recorded anything more than simple instructions, warnings, or spells.[citation needed]

The first letters of nouns and words that began sentences could be capitalized. This was achieved with a simple horizontal accent over the letter:

Words were generally separated by spaces. To end sentences, the most common method was a large line or slash across the line.[2][3][4][5]

To emphasize or show contrast against the writing surface, the runes could be painted. Names of people, races, and locations were highlighted in red, while the rest of the text was painted black or left unadorned.[2][4][3][5]

Any numbers enclosed in boxes were dates, written as day followed by year.[2][3][4]

Emotional content could be represented in how the runes were oriented, such as how the dwarven warhammer Oath-Hammer was marked in slanted runes to express the rage of its creator.[9]

Dwarf-written Dethek runes were preferably carved into durable stone, and less often into metal, and rarely written on paper or cloth due to the short life and fragile nature of such materials. Dwarven runes were usually carved or scraped into the stone walls of a building or cave; on a cairn, pillar, or standing stone, or inscribed or stamped on metal surfaces such as a weapon. Particular forms of dwarven writing were books of bound metal sheets or on stone tablets called runestones.[2][3][4][5]

The simplicity of Dethek runes and their straight lines made carving them into metal and stone simple.[10] Despite this, runes inscribed on runestones were typically written in a spiral-form, from outside in.[2][4][3][5]

This piece of text shows how written stories using the collective symbols can be misinterpreted:

Depending on how one wanted to tell the story, this passage could be read in two ways:

This example is a partial phrase demonstrating runes written on parchment:[11][12][note 4]

It transliterates to: "bases of operation of the zhentarim or black network".

Dethek runes dated to back to the beginning of recorded history in Faerûn, but it was only one of a number of different runic scripts in use over the centuries, including individual clan codes. Dethek survived to become the most well known and commonly used runic script by the 14th century DR. The others became "dead tongues" and were little used at that time.[2][3][4]

Strong links between the gold dwarves of the Great Rift and the early people of Unther led to the Untheric language using Dethek runes.[13]

The Damaran language used Dethek runes as a result of cooperation between the people of Impiltur and the dwarves of the Earthfast Mountains early in their history.[15]

Speakers of the Shaaran tongue picked up Dethek runes from gold dwarf traders from the Great Rift.[14]

The letters and numerals of Dethek. 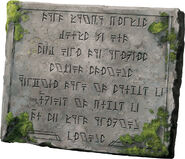 Retrieved from "https://forgottenrealms.fandom.com/wiki/Dethek?oldid=583225"
Community content is available under CC-BY-SA unless otherwise noted.