Start a Wiki
This article is about the town in Cormyr. For the human farmer, see Dhedluk (human).

Dhedluk (pronounced: /dɛdˈluːk/ dead-LUKE[1]) was a small town surrounded by a stockade in the King's Forest in Cormyr. It had a population of 936 as of 1372 DR. It was a farming and woodcarving community led by Lord Thiombar.[2] A short forest trail called the Ranger's Way linked it to Waymoot in the southwest and Starwater Road led north, out of the forest to Eveningstar.[3]

It was a beautiful place, with dappled sunlight reaching down through the eaves of gigantic trees covered in moss. It was a popular place for nobles and Purple Dragons to retire to, which was why a small stone and timber hut could be sold for upwards of 16,000 golden lions. Despite being primarily a logging village, expanding the forest clearing was forbidden in the 1360s DR. There were still bogs surrounding the town, which meant it remained popular with skilled woodcarvers and herbalists. There were three small quail ranches and a boobrie farm.[4]

Most travelers recognizef Dhedluk for one thing: the Blushing Maiden Inn, which was run by Thiombar.[1] The town was also home to the sage, Astergullph Daeryn.[5]

There was also a two-way portal just outside the town, which led to an area near the court buildings at Castle Obarskyr in Suzail.[2] By 1479 DR, the portal no longer functioned.[6]

The following organizations operated in and around Dhedluk in the 1360s DR:

Back when Dhedluk was still only a small village, it used to be called Dheolur, after the noble family who lived here. That family was eventually disbanded because it sided against the crown too many times.[4]

In 1369 DR, the events of Halaster's Higharvestide resulted in a tribe of kobolds, led by Vhue, coming to reside in the thick forest about half a day east of Dhedluk. Their existence remained secret, as the few who stumbled across them were slain.[8]

By 1479 DR, cutting living wood had become a major taboo. Those who were caught were hanged on the arch on the outskirts of Dhedluk.[6] 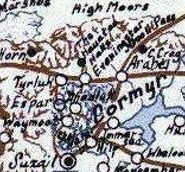 Retrieved from "https://forgottenrealms.fandom.com/wiki/Dhedluk_(town)?oldid=438199"
Community content is available under CC-BY-SA unless otherwise noted.