10 ft (3 m)[3]
Diamond golems were the strongest of the beautiful gemstone golems. They were made entirely from diamonds.[3][4]

Diamond golems usually stood 10 feet (3 meters) tall and weighed thousands of pounds. They usually resembled muscular humans clad in armor, sometimes carrying swords and shields, though these were purely cosmetic additions and had no bearing on their combat effectiveness.[3]

Unlike other gemstone golems, diamond golems had something of a personality, and seemed obsessed with precision and perfection. This was demonstrated in the way they attempted to follow commands exactly, and in their slow and methodical approach to combat.[1]

Diamond golems were totally immune to all forms of heat, acid, and electricity.[3]

They struck at enemies with their fists, backed by the strength of a storm giant, with devastating blows. Strong magical weapons were needed to piece their diamond armor. Diamond golems were mostly immune to any nature-based magic, making them extremely useful against the witches of Rashemen.[3]

A diamond golem could spray a cloud of tiny diamond chips in all directions, causing great harm to any creature within a 25 feet (7.6 meters) radius. They could also emit a blinding blast similar to the divine sunray or sunbeam spell, and would do so prior to closing into melee combat.[3][1] They would obsessively cast true strike before every melee attack, regardless of any tactical or strategical considerations.[1]

The shatter spell was effective at harming diamond golems. Crystalbrittle reduced their immunity to nature, heat, acid, and electricity-based magic while also allowing slightly weaker magical weapons to penetrate their armor. A mending spell partially healed a diamond golem while glassteel restored them to full health.[3]

Diamond golems, like all gemstone golems, were formidable opponents in battle. The easiest way to combat them was to disrupt the circle of wizards that controlled them. Any disruption to the circle caused the diamond golem to wander aimlessly.[3]

Diamond golems were used by the Red Wizards of Thay. A circle of at least a dozen wizards, led by a superior, was needed to control them.[3] As of 1372 DR diamond golems were more likely to be found outside of such powerful direct control. Those golems could either be free-willed, or still answering to a master, though their quirks limited their ability to follow orders effectively.[1]

Creating a diamond golem did not actually require enough diamond to craft the entire construct, but rather a diamond of no less than ten thousand gold pieces which served as the golem's "heart." The rest of the body could be made of other materials, predominantly semi-precious stones, totaling at least sixty-five thousand gold pieces. The magic of the golem's creation would transform these stones into diamond.[1]

A diamond golem would collapse into a pile of rough cut diamonds and powder when slain. The gems were quite valuable, and the powder could be used by wizards for spell components[3] although it was otherwise worthless, with most of the golem's creation material having been destroyed. The golem's "heart" would also be left behind.[1]

Like all gemstone golems, the secret to creating diamond golems was devised by practitioners of gem magic in ancient Mulhorand. The secret was rediscovered by the Red Wizard Aznar Thrul in 1368 DR, who sought to use the golems to conquer Rashemen.[1][5] However, by 1372 DR he had lost control of his golems, who went rogue and spread out across the continent to pursue misremembered or gargled directives.[1]

Adventures
Throne of Deceit • The Runes of Chaos
Video Games
Neverwinter Nights: Tyrants of the Moonsea 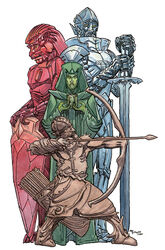 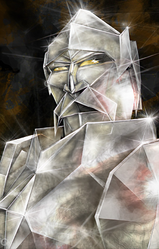 Yes, this is another diamond golem