Diana[1] the Acrobat, was a companion of Elminster's apprentice, Presto, as well as an adventuring monk.[2]

Diana was confident and smart. When the leader of their adventuring group, Hank, was not around, she would sometimes lead the others. She was an award-winning gymnast.[1]

When grown up, the monk looked very similar. Diana kept similar apparel, from her top and shorts to her armband to her circlet. She even carried around a staff. The monk's hair, however, became longer and wavier.[2]

Diana fought with a javelin staff, which she also used to move around the battlefield. She wore a vest of escape, an amulet of natural armor +1, bracers of armor +3, and a ring of protection +1.[1]

Diana was originally from Earth, but was later trapped in the Realm. She and her friends made powerful allies, but also powerful foes, including Tiamat, who could move between worlds.[1]

In the mid–14th century DR, Diana and her adventuring group convinced Presto to confront Elminster of Shadowdale, but the kind monk reassured the wizard that he didn't have to.[2]

By 1369 DR, a store in Athkatla displayed paintings of her two friends, Bobby (alongside his unicorn friend Uni) and Hank. The accompanying description of the paintings stated that they were presumably slain by Tiamat.[3] 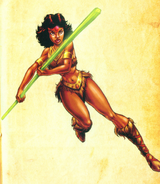 Hank and Diana battling a blue dragon on Stormwreck Isle.