Most dire bears were 12 feet (3.7 meters) long and weighed as much as 8,000 pounds (3.6 metric tons). While resembling bears, they also had bony brow ridges and extra-long claws, with a more feral aspect and cold piercing eyes.[2]

Dire bears ripped at opponents with their claws, grabbing hold of them, and they could also bite.[2] When the prey was grabbed, the massive bear would maul the creature with its ursine strength.[1]

Dire bears normally did not attack other creatures that did not bother them. However, they were aggressive in defending a food source or a kill. They were omnivorous, but would tear apart anything if they thought it had good inside.[2] Dire bears were wild beasts, though, and would feast on human flesh as readily as any other game animal.[1]

Encountered alone or in pairs,[2] they lived in small groups or preferred to be alone.[1]

Many humanoids were known to train dire bears to act as guards or pets, such as hill giants and ettins.[1]

The demon lord Baphomet was known to sometimes have awakened dire bears serving him.[3] 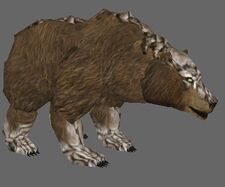 A dire bear in the Neverwinter Nights game editor. 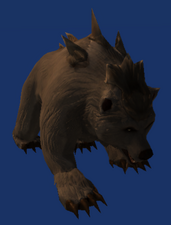