Displacer beasts were large cat-like creatures, sometimes described as panther or puma-like with six legs and a pair of long tentacles sprouting from their shoulders. They were covered in a pelt of blue-black fur. They were usually about 9 feet long and weighed as much as 500 pounds, but the occasional mutant could be twice this size. In some versions, they were considered to be emaciated.[3]

Displacer beasts used their innate magic to bend light, making them appear to be a foot or two from their actual positions.[3]

Displacer beasts were not very intelligent, but they were more so than animals and could even speak some Common.[3]

These monsters lived in small groups or preferred to be alone.[3] Many humanoids trained them to act as guards or pets, such as members of the Unseelie Court and onis.[2]

Like many big cats, displacer beasts often were pack hunters, although they were sometimes encountered alone.[3]

Displacer beasts' hide was a valuable commodity, used to create highly sought-after enchanted items such as Kumakawa hide armors and cloaks of displacement.[7]

Another theory posited that displacer beasts had their origin in Bhaal, the Lord of Murder, who brought forth the first displacer beast, Shantu, using the a corrupted moonwell on the island of Gwynneth in the Moonshae Isles.[8]

Depiction of a displacer beast in the 1st edition accessory AD&D Monster Cards.

A displacer beast and its prey. 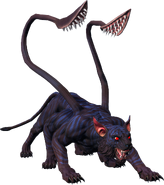 A displacer beast from Neverwinter: Sharandar. 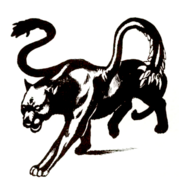 A displacer beast from 2nd edition. 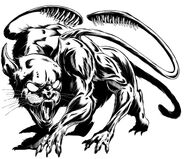