Lion-like body[1]
Red dragon head[1]
The dracosphinx was a desert-dwelling creature related to red dragons. This sphinx was a sly predator, roaming the desert highlands in search of all sorts of prey. They preferred to lair in bleak cliff sides, where they had an excellent vantage point of their hunting territory. Their main enemy was the stupid and more numerous hieracosphinx, but dragons, humans, and sometimes wyverns were also a territorial problem.[1]

The dracosphinx had the same sort of lion body type as other sphinxes, but was also quite different from them. The head, front paws, wings, and upper body were red and scaly like those of a red dragon, while colorful feathers surrounded the head. These sphinxes were actually egg-laying mammals, who mated once in a lifetime.[1]

When not hunting, the dracosphinx could be found sunning itself in the hot desert sun, or in search of obscure information. They were also philosophers, though their ideals tended to favor stronger creatures over weaker ones. They seemed to enjoy nothing more than engaging intelligent beings in riddle contests and sly conversation, setting their opponent up for sudden, cunning attack. Above all, dracosphinxes possessed the same greed for monetary treasure as dragons, and would do anything to possess it.[1]

In combat, a dracosphinx attacked with its large dragon claws and bites. They used their powerful breath to dispose of foes, after using their illusions to give prey a false sense of security.[1]

The dracosphinx spoke Common and the same dialect of Draconic as the red dragon.[1] 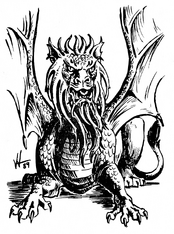 A dracosphinx lies on the ground.