From ocher color to reddish-brown
Dragonkin were a type of monstrous humanoids of Faerûn, believed to be distant cousins of the mighty dragons. While they formed wild tribes around Toril, individuals were often enthralled into the service of powerful and malevolent humans,[5] especially by members of the Cult of the Dragon.[2][3]

These draconic beasts stood much taller than other humanoids, with scaled hides whose colors ranged from an ocher color to reddish-brown, often highlighted with darker markings, spots, or bands. Their fully-functioning wings were either similar in hue to their hides or were tinted gold or even green. While their faces resembled those of true dragons, they had thick manes and rear-facing horns.[5] Gray smoke billowed from their nostrils when they entered agitated state. Their blood was black.[6]

Aided by their innate ability to detect magic, dragonkin had a compulsion to own magic items. That compulsion often led them to conflicts and when in combat, they almost always targeted opponents armed with enchanted weapon, armor, and trinkets. The desire for magic was so strong that often they just grabbed the items radiating magic and flee to their lairs. The dragonkin were much more likely to swoop and steal magic items when in the air, rather than turning their backs to the enemies while fleeing on the ground.[3]

The dragonkin trained by the Cult of the Dragons were trained to somewhat suppress their compulsions and they rarely abandoned their missions in favor for the magic items' theft.[3]

Dragonkin preferred to engage their enemies from the air, diving down and striking with their claws, raking their targets[3]. If they were grounded they would resort to using their weapons, typically favoring polearms.[2] Unlike their larger cousins, their tails were not particularly useful in battle.[5] The dragonkin who were trained in combat by the cultists or via some other source, were able to deal two extra attacks with their hind claws while in the air.[3]

While dragonkin of the wild eschewed the use of magic weapons, they did have the innate ability to detect magic. A select few of them were born with sorcerous powers.[2]

Due to their draconic lineage, they were vulnerable to magic weapons, abilities, and spells that affected or were exclusively aimed to be effective against dragons.[1]

During the 13th century DR, a tribe of white-scaled dragonkin resided in the mountains overlooking the Bottomless Bogs in Vaasa, and were locally referred to as the "dragonmen." They terrorized the locals and any passing caravans, spotting them from their high vantage points and swooping down in formation to attack.[7][note 1]

Sometime before 1369 DR, the Cult of the Dragon gained loyalty of a small number of dragonkin tribes in exchange for instilling discipline within their communities, teaching them advanced combat and arcane skills of barbarians and sorcerers, as well as supplying them with enchanted items.[3] Some of these dragonkin joined Kya Mordrayn on her quest to corrupt Myth Drannor's mythal and pool of radiance. The dragonkin troops were given full control of one of the Castle Cormanthor's aeries atop castle's spire, as well as living and breeding quarters in the castle's sub-levels and in the Elven Catacombs.[1]

Some of the stronger and more talented dragonkin were promoted to the rank of Captain by the Cult of the Dragon.[1]

Dragon-kin in service of the Cult of the Dragon in Myth Drannor.

A half-dragon Marjon and a dragonkin. 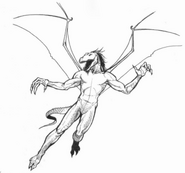