Edit
watch 08:33
The History Of Duergar - 'Forgotten Realms' Lore
Do you like this video?
Play Sound

from Faerûn History
This article is about the dwarven sub-race. For the dwarven clan, see Clan Duergar.

Dvergar (Norse)
Duergar (pronounced: /ˈdjuːɜːrgɑːr/ DEW-ur-gar[11]), also known as gray dwarves,[9] or underdwarves[12] were a subterranean subrace of dwarves.[1][2] They carved out an existence in the Underdark, often near volcanoes.[13] Their kinship to other dwarven subraces could be compared to that of the drow to surface elves.[9]
“
Consider that the duergar began as homeless outcasts, and today their fortresses are some of the most impregnable strong points in the Underdark. The question might not be if they will conquer the realm below, but when.
”
— Mordenkainen[14]

Like other dwarves, duergar were typically stocky figures, though beyond this there were many differences. Both male and female duergar were typically bald, with females also lacking the capacity to grow facial hair. Many were also thinner than their dwarven brethren. Most obvious, however, was their dull gray skin and hair, often matched with an equally stolid expression.[9] Regular dwarves said they had flat heads, possibly as an insult.[15]

Because many duergar found on the surface world were criminal exiles, a surface dweller who encountered one of the gray dwarves was likely to notice facial and arm tattoos that marked the duergar as a traitor to his or her people.[9]

“
Work or die. In the first case, you are useful. In the second, you are entertaining.
”
— Vozala Spikefist[16]

Duergar were at heart a grim and bitter race, pessimistic of their future and deeply cynical regarding the motives of others. In a dark inversion of the strong family bonds typical of their dwarven kin, duergar viewed their kin and clan as adversaries set on holding them back, an expectation that became a self-fulfilling prophecy since every duergar came to believe this from early childhood. As a result, duergar were a dark and cruel race, who showed no mercy to their foes and who took great pleasure in inflicting pain on others, a welcome relief from what they believed was a meaningless life, that would end, inevitably, in betrayal.[10]

Because of their pessimism, duergar rarely adventured of their own free will and were instead most commonly exiles cast out of their society. These adventurers, most commonly concerned with personal gratification, were frequently fighters or rogues, leaning on their training against the threats of the Underdark. Clerics were fairly common as well, serving the duergar gods in order to gain power and influence within society. Unlike Shield Dwarves, duergar had no particular prejudices against arcane spellcasters and both smiths specializing in the smithy of enchanted items and wizards were well respected. Because of their cruel nature, experienced duergar adventurers often became assassins or blackguards, though the veneration of runes in duergar culture also led many to become runecasters.[10]

Duergar were in some ways even better adapted to underground living than other dwarves. While other dwarves lacked the capacity to see completely in the deepest darkness, this was not a problem for duergar. Duergar were also immune to many of the ancient techniques used by the mind flayers to control them, such as paralysis, phantasms, alchemical poisons, or some types of illusion.[9]

Duergar were also a sneaky, crafty people, unlike their honor-bound cousins, and often excelled at setting up ambushes or moving out of sight. Conversely, many were also good at detecting hidden objects. A few duergar also possessed natural abilities akin to the enlarge and invisibility spells. This came at a cost, however, and duergar, like drow, had a special vulnerability to sunlight.[9]

Duergar were, as a whole, generally cruel and malevolent creatures, but as in most evil races this was as much a cultural affectation as a psychological trait. A few duergar turned away from the worship of the wicked gods who ruled over the duergar such as Laduguer and Deep Duerra and found salvation through the Morndinsamman. Other duergar found escape from their society through petty crime, tattooed and cast out from their cities beneath the surface and driven into the arms of other races. Their grim disposition, however, made them unlikely to form many lasting friendships.[9]

Duergar primarily spoke Duergan, a dialect of Dwarven descended from the dialect of the shield dwarves and heavily influenced by mind flayer and drow words found in Undercommon. Duergar themselves were commonly fluent in Undercommon, the lingua franca of the Underdark. Other common second languages for duergar were those of their enemies, such as Draconic, Drow, Giant, Goblin, or Orc. Others might learn Terran in order to conduct trade with earth elementals, while others learned Common to trade with the surface world.[10] Duergar would often ferment fire lichen into their alcoholic beverages, to create a hot and spicy drink.[13]

As the worshipers of Laduguer, the duergar had a long tradition of crafting that went back to their days as the rulers of Barakuir. Like other dwarves, duergar were fine craftsmen with an eye for detail, though they were often pragmatic enough to eschew the ostentatious decorations of their kin, which they felt were not only wasteful, but which could potentially give away their presence when treading the Underdark. Additionally, duergar art, unlike that of their brethren, was notable for its veneration of blood and cruelty, with scenes of warfare marking much of their art.[10]

Most of all, duergar were concerned with practicality, peddling military saddles, thunderstones, poisons, and an extraordinarily effective form of armor lubricant. Like Gold and Shield Dwarves, duergar preferred weapons that could serve as tools on the fly, such as hammers or picks.[10]

For pets or familiars, duergar often enjoyed the company of Underdark creatures, such as bats, spiders, osquips, or spitting crawlers. For beasts of burden, duergar used large lizards or steeders.[10]

Unlike other dwarves, duergar had a strong tradition of magic, both in the divine and arcane varieties and duergar clerics, runecasters, runesmiths, and wizards were highly respected for their skill. In particular, the duergar had a fondness for magically crafted items that they could use to aid them in combat, protect their minds against tampering, or to hide from enemy senses. Duergar crafted many magic items unique to them, such as absorbing shields, bolts of battering, and stonereaver axes.[10]

The chief god of the duergar was Laduguer, the dwarven god of crafting, a tradition going back to the days of Clan Duergar, when the god served as the clan's divine patron. Early on, the veneration of Laduguer led to disputes with many of the other kingdoms of Shanatar, who chose to venerate Dumathoin as the patron of the entire shield dwarven race. When Clan Duergar was enslaved by the mind flayers, the duergar carried on their worship in captivity,[10] although some secretly formed pacts with the devils of the Nine Hells as well.[13]

Although the duergar formally venerated all the Morndinsamman, the duergar in their captivity became only more devout in their exclusive worship of Laduguer and, later on, his adopted daughter Deep Duerra. Duerra, initially a duergar herself, was beloved among the duergar for having stolen the Invisible Art from the mind flayers during her campaign against them.[10] They didn't receive the Thunder Blessing like other dwarves and saw it as yet another sign of the Morndinsamman having abandoned them.[17] However, Laduguer and Duerra perished during the Spellplague and, in their desperation, the duergar turned to Asmodeus.[13]

Relations with Other Races[]

Duergar were a coarse and distrustful race who felt that other races were out to get them, whether they were from the Underdark or the surface world. In spite of this, duergar were usually willing to trade with outside races, particularly from the surface world, for the sake of profit and the relations between duergar and their sometime-enemies, sometime-friends the drow and deep gnomes were especially complicated. However, the duergar had absolutely no love in their heart for their closest of kin, the shield dwarves, who the duergar felt abandoned them to the onslaught of the mind flayers. Since then, the duergar had waged war time and time again against the shield dwarves, demonstrating a deep-seated loathing.[10]

Initially, the duergar were a clan of shield dwarves in the dwarven kingdom of Barakuir, located within the ancient realm of Shanatar. Clan Duergar, which venerated Laduguer as their patron, was an ambitious and powerful clan, believing that they should lead the kingdoms of Shanatar themselves. When they were denied following the Second Spider War, Clan Duergar turned away from the other dwarven clans, paying only lip service to Shanatar's rulers. This proved a mistake when the mind flayers of Oryndoll, seeing the isolation of Barakuir, attacked the realm in −8100 DR, enslaving or killing most of the population.[10]

During their captivity, which lasted for generations, the mind flayers performed many cruel and unusual experiments on the dwarves.[9] It was during this harsh period of their history that the duergar emerged as a distinct subrace.[13] Eventually, they rose up against their captors and gained their freedom from the mind flayers.[9]

Now free, the duergar carved out a new home for themselves beneath the Great Glacier, founding the city of Gracklstugh in −3717 DR. The Deepkingdom spread rapidly through the northern reaches of the Underdark, reaching its peak in −2600 DR before a war with the quaggoths of Ursandunthar caused it to enter a gradual decline, battling the remnants of the nation and urged on by drow for centuries thereafter.[10]

Further to the south, beneath central Faerûn, the duergar established Dunspeirrin underneath the Orsraun Mountains, which grew to encompass the caverns beneath Turmish and the Dragon Coast. Dunspeirrin reached its height of power in −1800 DR, when Queen Duerra defeated an alliance of drow from Undreath and the mind flayers of Oryndoll, reclaiming Deep Shanatar and Alatorin. As her divine reward, Duerra was raised to godhood by Laduguer. Afterward, however, the duergar of Dunspeirrin fell into a decline, returning to power following the Time of Troubles, only to fall into a long and arduous war with the Army of Gold.[10]

An example of duergar society. 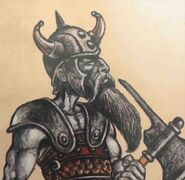 A portrait of a hooded and tattooed duergar.