Once the proud "Jewel of the North", the city of Neverwinter was a beacon of civilization within the otherwise savage northern reaches of Faerûn. That was until the Ruining, when Mount Hotenow erupted and all but destroyed the city. Nearly three decades later, the city still struggled to rebuild.

The game starts with a group of adventurers helping the doomguides to clear Neverdeath of undead, while having occasional skirmishes with the Sons of Alagondar. After a few missions, the adventurers' reputation grows and the Lord Protector of Neverwinter, Dagult Neverember, takes notice of them. The adventurers are then tasked with missions in other regions nearby the city.

The Neverwinter Wood was infested by kobolds and their white dragon lord, while Conyberry and Helm's Hold had problems with a large and violent goblin tribe. As the adventurers destroy these menaces, they uncover the plots of the scheming prophet Rohini.

The ruins of Illefarn were infested with vampires. While exploring the area, the adventurers have to face the wrath of a vampire lord and his spawn.

During their travels, the adventurers also foil the plots of a bandit gang trying to steal from merchant caravans from Waterdeep, and are able to retake the Old Owl Well from the orcs of Many-Arrows, earning an important victory for Lord Neverember's faction.

The adventurers also find a portal to Gauntlgrym and destroy an evil cult located there. They also uncover and stop a Thayan plot to raise an army of undead led by a death tyrant beholder.

Eventually, the adventurers uncover and stop a drow invasion of the city, becoming the heroes of Neverwinter.

There were over 55 dungeons in six separate areas of varying levels and difficulties:

Players also had the ability to create their own dungeons to share with friends.

Players could chose between five races and the four basic classes (Cleric, Fighter, Rogue, and Wizard) to create their adventurers. While the races had recommended classes (classes better suited to the races' bonuses and skills), the player was free to create their own combinations if they wanted to.

Except for the dwarf, which players had to purchase in order to play with one, all races and classes were free to play.

Promotional image of the playable characters.

Map of Neverwinter and nearby regions. 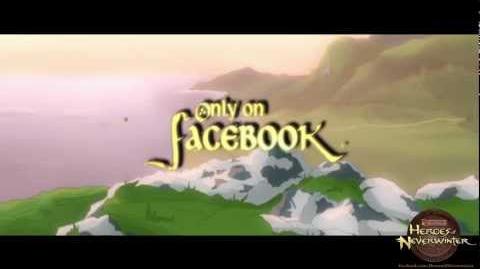 Heroes of Neverwinter Trailer
Trailer.
Add a photo to this gallery