Edit
This article is about the tower. For the Adventurers League module, see Durlag's Tower (adventure).

Durlag's Tower was a large tower south of the Wood of Sharp Teeth, situated on top of a rough patch of hard rock.[1]

This local landmark was the isolated keep of Durlag Trollkiller, son of Bolhur the Clanless, a dwarven hero said to have amassed a large quantity of treasure and stored it here and in a few other locations. This treasure was protected by all manner of magical wards and mechanical traps, the latter of Durlag's own devising.[1] Many adventurers sought his treasure over the decades, with varying degrees of success. Around 1372 DR, rumors said a fiend had taken up residence within the remains of the tower and used the defenses created by Durlag to keep both itself and the treasure safe.[2] Some claimed that this creature was a lich.[3]

The fortress was located a couple of miles from the small settlement of Gullykin.[2]

The tower was built entirely of volcanic stone and was in fair condition given the amount of time and neglect involved. It laid atop a volcanic plug that dominated the surrounding lands. Durlag, aided by hired dwarves, was said to have hollowed out the mountain for the rock that made up his tower and used the space created to hide further treasure.[4] 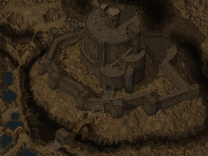 Durlag's Tower as it appears in the game, Baldur's Gate