"The Wanderer"
"The One"

Durnan (pronounced: /ˈdʌrˈnɑːn/ Durr-NAN[7]), occasionally known as Durham[8], was the gruff, burly yet close-mouthed Masked Lord of Waterdeep[9] who ran the Yawning Portal Inn and considered himself the self-appointed gatekeeper to Undermountain.[8] He was known for having explored Undermountain.[10]
“
I'll give you a free flagon of ale if you don't talk to me about the weather.
”
— Durnan[11]

He had a strong dislike for hobgoblins. Mirt believed he may have lost family, friends, and neighbors—and even been left homeless—by hobgoblin raids, although Durnan himself would never speak on the subject.[12]

Durnan fought with either a dagger, a handaxe, or a longsword and did so with tremendous physical strength. However, he also kept at least one secret magical weapon on his person, while at the same time carrying a mundane one in the open.[1]

He was the owner of a very sturdy body. However, he was also very wise and knowledgeable to the point of being considered a "thinking man's barbarian". He knew a lot about various weapons and martial arts, including from Kara-Tur and the Hordelands. While he had no spellcasting abilities of his own, he was knowledgeable enough that he could recognize the properties of a lot of spells.[1]

As mentioned above, he fought either with a dagger, a handaxe, or a longsword and held at least one secret magical weapon on his person. He also owned and distributed magic items among his family members. It was known that he and his family were equipped with defensive magic items like rings of spell turning or even greenstone amulets. A magic item, which Durnan always wore, were a pair of powerful bracers of defense.[1]

During his foray into Undermountain, he came out of the dungeon with at least eight doses of potion of longevity.[4]

Durnan was friends with Khelben "Blackstaff" Arunsun.[8] He had a secret association with the Red Sashes,[12] a group that committed vigilantism. More precisely, he was their secret leader and continued to be such even while being one of the Lords of Waterdeep.[1]

He was married to Mhaere Dryndilstann and had a daughter with her called Tamsil Dryndilstann whom she taught the basics of battle to give her the necessary skills against problematic customers.[1]

He also had a special relationship with the local clergy of Tymora. He daily paid the deity's temple to send one of their clerics over to heal people. This service was not charity on the temple's side. It was not merely expected but paying donations to the caster was actually enforced and Lady Luck's clerics accepted nothing but cash, meaning no credits.[1]

As an additional security, Durnan hired skilled fighters, who were at all times armed, to pretend being customers. These people were no mere mercenaries but were incredibly loyal to Durnan. So loyal in fact that magically compelling them to disobey or harm Durnan, his family, or the family's property was not just impossible but actually something that broke the spell.[1]

Durnan was known as "The Wanderer" because that was precisely what he spent his youth doing: wandering around seemingly aimlessly, killing monsters.[citation needed]

In 1302 DR, Durnan and Mirt the Merciless went into Undermountain and managed to come back not only alive but also rich.[14] This was one of the first instances of somebody surviving a foray into Halaster's property. He used the looted wealth to tear down the remnants of Halaster's Hold to build the Yawning Portal inn. He spread the information about the size and the wealth that could be found in Undermountain. Combined with the good location, on which he built his inn, it guaranteed him his living by selling equipment to people who wanted to enter the dungeon too.[15] Durnan retired as an adventurer. The reason for this was that he made a promise to his girlfriend at that time to come back to her when he managed to become rich.[13]

His hatred of injustice and unfairness earned him a place[citation needed] with the Masked Lords. This position of authority did not prevent him from taking matters of law into his own hand, and he led a group of vigilantes called the Red Sashes.[1]

Durnan as he appears in Neverwinter Nights: Hordes of the Underdark. 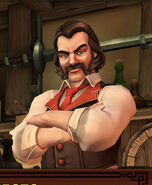 Duenan as he appeared in the Warriors of Waterdeep.

Durnan in Expedition to Undermountain.

Durnan in Descent to Undermountain. 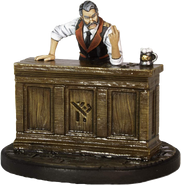 A miniature of Durnan.