Wizard (invoker)
Dynaheir was a young invoker in the wychlaran of Rashemen who undertook her dajemma to the far off region of the Sword Coast in the mid-14th century DR. She was not alone on this journey, as she accompanied by her berserker companion Minsc and his hamster Boo.[1]

Dynaheir was very confident, self-assured and possessed the sensibility of someone who lived long before her time. She could be very demanding of her companions, especially Minsc.[1]

In addition to being a skilled invoker, Dynaheir possessed the innate spell-like ability to slow poison.[1]

Although she respected Minsc, and he in turn proved his loyalty and dedication as her protector, she did doubt his sanity at times. She felt he was decidedly over protective at times.[1]

Little was known about Dynaheir's past, other than she was originally from Rashemen and left the eastern realm for the West Faerûn alongside her bodyguard Minsc. The two traveled together all the way to the Sword Coast, seeking out information about the Bhaalspawn. At the same time, Dynaheir was being hunted by a conjurer from the Red Wizards of Thay named Edwin Odesseiron.[1]

Some time in the Year of the Banner, 1368 DR, Dynaheir and Minsc became separated in their journey and the witch of Rashemen was taken captive by a band of gnolls. They took the young wychlaran to their stronghold west of the Bear River in the region of Amn north of the Cloud Peaks. Minsc tracked the gnolls to their hideout and sought out adventurers to aid in her rescue.[1]

It was unknown exactly when, but Dynaheir and Minsc were eventually reunited. Following the end of the iron crisis, the pair lingered in the city of Baldur's Gate. Dynaheir wanted to investigate the enigmatic Shining Lady, who had just raised an army of mercenaries and zealots.[3]

Dynaheir was among the individuals that came to the rescue of Gorion's Ward in the Year of the Gauntlet, 1369 DR, following their imprisonment within the dungeons of the Flaming Fist headquarters in Baldur's Gate. She was accompanied by Minsc and Boo of course, along with the Harpers Khalid and Jaheira, and the young mage Imoen. Almost immediately the group was ambushed and imprisoned by the disfigured wizard, Jon Irenicus. While the exact manner is unknown, Dynaheir died in the dungeons beneath the city of Athkatla.[2] 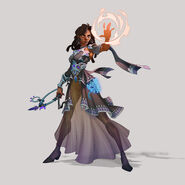 Dynaheir as she appears in the canceled D&D Dice Adventures.