Waterfall plunging into a still pool

Waterfall plunging into a still pool

Net (net or net that does damage as unarmed strike)

listen), also known as The Green Goddess, Mother Guardian of Groves, or the Mother of the Waters among the Bedine people,[13] was a lake spirit[14] who acted as the guardian of groves and watersheds. Her presence was felt wherever there was calm.[11]
“
Who is Eldath? Eldath is a goddess. They call her the Quiet One. She's a healer, and she serves Silvanus and helps the druids of the Emerald Enclave.
”
— Cerril[15]

Eldath normally appeared in a 10 ft (3 m) tall female form, but the details varied. Depictions in religious art and known appearances has her as a human, wild elf, sea elf, dryad, and nereid. She was tall, thin, graceful, beautiful, and her form was always translucent enough to be seen through at all times. Sometimes she was said to have dark hair while at others her hair was colorless like water, and seemed more like spun glass or flowing ice; as a dryad or wild elf, her hair was blue and green. Her eyes were a deep shade of green.[11]

Eldath's feet were bare and her green, silken, shimmering garments clung to her form as they flowed, yet her appearance soothed rather than aroused lustful feelings.[11]

Eldath was a pacifist who avoided hostile action, even if threatened. Although shy, quiet, and enigmatic, the Green Goddess was possessed of unknown depths of character and unexpressed resolve that could not be broken. Eldath protected rivers, streams, and druids' groves.[11]

The Mother of the Waters was regarded as a goddess of serenity, comfort, and healing. Any waters blessed by her were known to cure sickness and madness. They could also calm the dying giving them peace and a natural passing.[16]

Eldath considered Mielikki a sister and together with her she served Silvanus loyally, even if she did find him at times intimidating. She had close relationships with Chauntea, Selûne, and Lathander, as they shared some common interests.[2] Eldath and Mielikki were said to directly bring retribution down on any who deliberately set fires in the High Forest.[17]

Although Eldath was diametrically opposed to Tempus, the Lord of Battles, they were not enemies.[11] He thought she was naïve, but appreciated her convictions and punished any of his followers that harmed Eldath's faithful or desecrated her shrines and temples.[18]

Eldathyns were organized into a simplistic hierarchy, where priests reported to a local high priest responsible for a realm or larger region. Most followers dwelt in quiet forest communities with open-air sacred places of worship or in woodside cottages, far from the baseness of city life; both often containing pools of placid water in unspoiled areas. They rarely ever engaged in open confrontation and always acted subtly and peacefully.[4]

Her clergy often followed migratory patterns traveling from holy site to holy site in a local area. They took care of the holy sites and allied with the local druids who followed the First Circle, of which Eldath was considered a member. Violence of any kind against an Eldathan priest was considered taboo, and murdering one was said to bring extremely bad luck. Even so, most servants of Eldath preferred to avoid conflict rather than trying to pacify it because they understood that peace cannot be forced. They would happily preside over peaceful meetings and witness political treaties.[16]

Many people came to Eldath for help in overcoming memories of a violent past. Sometimes this was a single event, and in other cases it was the accumulation of conflicts they had fought.[16]

Eldath's dogma was pacifistic, and her followers only resorted to violence in defense of themselves, of their friends and loved ones, and of pools and groves.[11] Worshipers of Eldath could be of any alignment, but priests were always non-evil.[11] Druids that followed the Mother of the Waters remained neutral, while her specialty priests sometimes leaned toward good.[19]

Druids of Eldath prayed for their evocations once per day at a time selected after great personal reflection. The only calendar-related holy day of the church was the Greening, a gathering and festival celebrated at Greengrass. It was preceded by Firstflow, a festival held at varying times when the ice broke up and began to flow at the conclusion of winter.[4]

Offerings to Eldath were typically weapons broken so they could never be used again, or an item that caused an argument and so had to be discarded to promote peace.[16]

Many rural communities had a designated pond or glade which served as a holy site for local parishioners. These places were traditionally used as places to reflect and meditate. Usually a body of water (either the pond itself or a stream near those glades considered holy sites) served as a repository for offerings to Eldath in connection with these holy places. If no water was nearby, a special tree or bush was designated as a repository on which offerings were tied to the branches.

According to Bedine legend, the sun goddess At'ar was jealous of Eldath's beauty and imprisoned her at the oasis of Elah'zad in the Anauroch desert.[13][4][20] 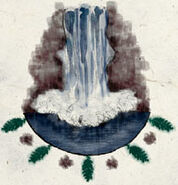 A holy symbol of Eldath.

Novels
Referenced only
The Parched Sea