10 ft (3 m) (diameter)[4]
An elder brain was the final stage of the mind flayer life cycle. The elder brain lived in a brine-filled pool in the center of a mind flayer city, where it guided its community by filling them with dark dreams of illithid domination.[5]

The elder brain's strong mind-affecting powers stemmed from the brains of long-dead mind flayers making up its viscous mass. Being composed of many brains as energy source for its intellect, it could communicate telepathically with any creature within a distance of 350 feet (110 meters)[5][6] and sense the presence of any sentient creature within 5 miles (8 kilometers).[1]

Although its intellect was of godlike proportions, its only physical attack was by using its tendrils to lash out at or grapple an opponent. Therefore, mind flayers protected their elder brain by securing it in a well-protected cave inside the city.

An elder brain could quickly cast spells at the same time as it used its tendrils to attack. It usually started combat with a powerful mind blast. It could then use many psionic attacks such as charm and domination abilities. On top of those, it could cast spells as an extremely powerful sorcerer, making it an opponent to be feared.[5]

The elder brain could then use its tentacles to lash out against opponents, usually those paralyzed by its psionic attacks.[5]

Forming the physical and spiritual center of a mind flayer community, the elder brain served as a living library of the community's history, technology, and knowledge. Playing this important role in a mind flayer society, it often doubled as an advisor in all sorts of political and military decisions, operating as the community's effective leader.[1][5]

Adventures
Referenced only
Waterdeep: Dungeon of the Mad Mage
Board Games
Tyrants of the Underdark: Aberrations and Undead

An elder brain from Lords of Madness: The Book of Aberrations. 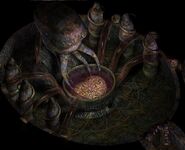 An elder brain from Baldur's Gate II: Shadows of Amn.