Elephant
Elephants were enormous plant-eating animals known for their prehensile trunks. In some lands, they were used as beasts of burden or mounts.[3]

The tusks of these creatures were made of ivory.[7]

Some elephants in the wild would be found in isolation, but they also had herd societies of between six and thirty animals.[3]

If attacking, elephants boldly charged at their opponents and trampled them.[6]

Elephants came in two kinds, a larger and stronger variety that was more unpredictable and a weaker, smaller elephant that was far easier to train. In addition, there were prehistoric elephants known as mastodons and mammoths.[6]

A brown-skinned short-eared species of elephant was a very common beast of riding and burden in the Utter East, namely, in the country of Doegan. The Mar people long ago learned to train and domesticate these elephants and relied on the beast for their day-to-day activities. After the Utter East's colonization by the Ffolk, most horses died off from diseases, leaving red oxen and elephants to be the dominant beasts to ride and to push carriages.[8]

In the land of Malatra, the Nubari tribe known as the Wise Ones worshiped the spirits of elephants through totems. Shamans within the tribe spoke daily with local elephants, of which there were always around eight near the edge of their village, to learn of recent events in their area. Whenever an elephant in the area got injured it would wander to the tribe in order to be healed by its shamans.[10] In the Kuong Kingdom, the creation story of the Lords of Creation held that Malatra was created in the footprints of a great elephant ridden by the goddess Indra. Naturally, the elephant was sacred to her. However, in neighboring Laothan, in Kompoa, elephants were simply slaughtered for their hides, and the Kuong believed this to be sin.[11]

The Zakharan island of Afyal was called the Isle of the Elephant. Elephants there were unusually intelligent and easy to be trained, and were inviolate by law.[12] They were also connected to Afyal's former main deity, the Lost One.[13]

The ivory tusks of elephants were a valued commodity in much of Faerûn[7] and in Kara-Tur; Jejima Horoto of Akkaido, Wa, imported eight tusks on a typical day in 1357 DR.[17]

A fiendish elephant named Tusk was a known combatant of the Underdark coliseum of Maerimydra. This elephant belonged to Kurgoth Hellspawn.[18]

A pair of elephants standing alongside a pair of tribal warriors.

An elephant is preyed upon by a roc. 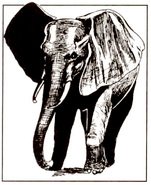 An elephant from 2nd edition.

Retrieved from "https://forgottenrealms.fandom.com/wiki/Elephant?oldid=648934"
Community content is available under CC-BY-SA unless otherwise noted.