Same range as humans plus shades of copper, bronze, and bluish-white

Same as humans plus green and blue

Same as humans plus gold and silver

Little to no body hair

Elf
Elves, much like their living ancestors, the eladrin, who were also commonly called elves, were a long-lived race of the Tel-quessir found most commonly in forests, shrublands, and other wildernesses. From time to time the elves organized strong nations, though with far less frequency than eladrin, in some cases adopting even a nomadic lifestyle. Almost all elves worshiped the gods of the Seldarine, and the elves were generally, though not always, good in nature.[citation needed]

Elves stood on average 5′4″‒6′0″ (1.6‒1.8 m) and weighed 130‒170 lb (59‒77 kg). Usually, true elves were a naturally slender and athletic race.[11] Elves had a similar range of complexions to humans, with wood elves typically coppery or pale skinned and wild elves having darker pigmentation. Often, elven hair was dark, either brown or black, with copper red or blond hair also found amongst wood elves,[12] although orange or even green hues were not completely unheard of.[11] Elven eyes are commonly brown, hazel, or an emerald green.[12] Elves, like their cousins the eladrin, were fair and beautiful, handsome, and had pointed ears and no body hair except eyebrows, eyelashes, and hair.[11]

Elves matured at roughly the same rate as humans,[11] though they were not usually considered past adolescence until they reached 110 years of age. Unlike humans, elves did not age dramatically as their lifespan came to a close, with the most obvious changes being a change in hair color, alternatively graying or darkening. Most elves remained healthy and full of life up until their death, which, if age-related, was usually between two[11] and nine centuries.[citation needed]

Elves had a number of abilities that set them apart from other humanoid races. Like their kin the eladrin, elves were agile, dexterous creatures. However, elves could move slightly faster than their eladrin kin and could move swiftly through even the roughest terrain. Elves were also more preternaturally aware of their surroundings than eladrin, as well as possessing better common sense. This aided elves in many ways, allowing elves a high degree of perceptiveness that they could lend partially to allies. Additionally, elves were extremely accurate in their attacks, having a degree of precision that would be unusual for other humanoids.[11]

Many elves did not sleep, instead finding their rest in a meditative state called "reverie", which was as restful as true sleep but left them aware of their surroundings, similar to an eladrin's ability to enter a trance.[13]

Elves commonly possessed strong but swiftly passing passions, being moved easily to laughter, anger, or misery and as quickly calmed. They were known for their impulsive behavior and, as a result, many races saw them as flighty or impetuous. However, elves were not as flaky as others might interpret them to be, and they were typically responsible despite their almost whimsical nature. Partially due to their long lifespan (though not entirely, since many long-lived races acted differently), elves had difficulty taking some matters as seriously as other races, but when threats they recognize did arise, elves were strong friends and allies to those they were loyal to.[11]

Elves tended to make strong and uplifting friends. Most elves loved simple joys such as dancing, singing, footraces, or contests of skill. They had a natural aversion to that which they saw as uninteresting tasks and were fun-loving by nature. However, despite how unpleasant some things such as war could be, elves became grimly serious if a threat to their friends, family, or livelihood made such actions necessary.[11]

Elves were usually found in small tribes throughout the forests of Toril, as well as on windswept plains and in mountain vales. The elves, as a whole, preferred these secluded places of nature to the cities and nations of the civilized world, living in harmony with their natural surroundings. Cautious and cunning warriors, particularly of the bow, elves secured these homelands through guile and tactics.[12]

There were at least nine different sub-races of elves:[9]

While not strictly sub-races of elves

The elves branched away from the eladrin in a long forgotten age, and no one was exactly sure which race came first, though most scholars believed the eladrin did.[21] Of the Tel-quessir, those who would become the elves were the first to arrive on the then united worlds of Abeir-Toril.[22] At that time, there were only the green elves, known as the Sy-tel-quessir in their own language.

Millennia passed and the fey ancestors of the elves and eladrin together ruled over much of Toril in relative peace until −12,000 DR, when the eladrin nation of Aryvandaar invaded the dark elf and green elf nation of Miyeritar, starting the first of five Crown Wars which, in total, lasted for 3000 years.[23]

The green elves suffered many defeats in the Crown Wars and by the end of the conflict had lost all of their former territory.[18] Driven into the wilderness, the green elves gradually changed over generations, with the gap between them and eladrin widening until they became a distinct race. This change caused the elves to gradually lose their talent for the arcane and grow even closer in their connections to the wilderness, becoming as much a part of the landscape as the wild beasts with whom they shared it.[24]

The green elves who remained in isolation became the wild elves and lost their taste for civilization and nation-building, becoming nomadic wanderers. It was also around this time that the first of the wood elves (or Or-tel-quessir) emerged,[18] when some of the wild elves migrated into the lands of the eladrin and bred with their kin race, creating a new hybrid culture.[citation needed]

The wood elves, unlike the wild elves, continued to build civilizations, though on a smaller scale than the eladrin. In the eastern High Forest, the wood elves founded the kingdom of Earlann, a contemporary and ally of Netheril.[18] However, when Earlann fell, the wood elves too abandoned the concept of nation-building, leaving it to the other races.[citation needed]

Elves as a whole ignored the Retreat to Evermeet, though some followed their eladrin brethren to the land across the Trackless Sea. Most elves remained in Faerûn, embracing the world around them rather than rejecting it, though a few tribes of wild elves also chose to withdraw from the world, hiding in remote places like the Chondalwood in order to evade the notice of the other races.[citation needed]

The human scholar Wosar Anion wrote a book about elves based on the studies conducted by the academic minds of Myth Drannor, entitled A Study of the Tel'Quessir, their Natural Talents, Societal Norms, and their Explanations.[25] 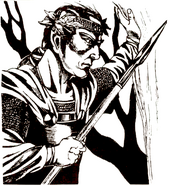 An elf from 2nd edition.
Add a photo to this gallery