Elven high mages were among some of the most passionate mages from among the elven species, whose zeal was viewed by others as bordering on obsession. They saw the uncovering of secrets of Elven high magic as the culmination of their career, and ultimately their purpose on Toril, and fiercely guarded their esoteric knowledge and arcane lore.[1]

As of the 1370's DR, there were less than a dozen elves that knew where the repository of knowledge regarding high magic was even located, let alone how to practice the epic magic.[1]

Wizards or sorcerers could become high mages, but under normal circumstances only elven casters were capable of casting high magic. There were two methods to becoming a High Mage. The first method was to petition the few remaining councils of high mages who resided in various elven strongholds or cities. If the petitioner was accepted, he or she could begin the study of High Magic through conventional means under the guidance and direction of the council. The second method was to inherit a Selu'Kiira and be taught high magic from the stone, provided they meet the stone's requirements and that it possessed such knowledge. Elves under the age of 300 generally weren't permitted to attain the rank of high mage. It was assumed that regardless of skill that they weren't experienced enough to possess such power.[2][3]

Normally it was only possible to cast true high magic spells with a group of high mages. Although some spells such as those that made changes, added to, or took away certain functions of a Mythal were possible provided the requisite knowledge was held. It was however possible for a single high mage to cast true high magic spells alone. In order to do so it was necessary for the caster to become something more than mortal, such as the case of the daemonfey sorceress Sarya Dlardrageth. It may have been possible for other planetouched creatures to yield the same effect but the only races known to have been joined were the demons and celestials.[3][page needed] 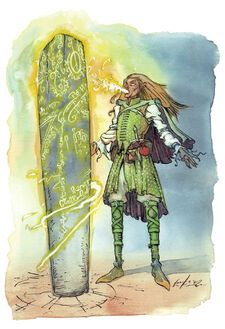 The elven high mages were masters of creating the elven magic of Mythals which could grow in power to envelop and protect entire cities.[1]

They were capable of casting spells with the power to change the Weave itself and the physical world of Toril. Some uses of high magic extended from Khelben Arunsun's efforts to bring together many powerful mages in order to restore the denizens of the lost city of Miyeritaar's High Mages, permanently cleanse part of the High Moor as well as the creation of the Hidden City of Hope.[4]

Q'arlynd Melarn and the other masters of the College of Ancient Arcana once cast a spell that wiped the name and memory of the drow goddess Kiaransalee from every being on every plane of existence causing her untimely death.[5][page needed] The same group also cast a spell that turned all non-Lolth worshiping Drow without demon tainted blood back into brown skinned Dark Elves. Master Melarn established the school of Ancient Arcana to bring the knowledge back into the hands of Dark Elves. [6]

Retrieved from "https://forgottenrealms.fandom.com/wiki/Elven_high_mage?oldid=480571"
Community content is available under CC-BY-SA unless otherwise noted.