1335 DR [2]
Orphan[3]
Erevis Cale was a shade and a chosen of Mask alongside Drasek Riven. Originally named Vasen Coriver, he was trained as a thief, assassin, and linguist by the Night Masks thieves' guild. However, when they found out he was skimming off the top on some jobs, he fled to Sembia.[4][2]

Vasen Coriver was a translator in training and an assassin under the employ of the Night Masks, who adopted him and raised him on the streets of Westgate. Adopted by the leader of the Night Masks, called "the Faceless", he was still just another member and would be let go if need be. His only friend and father figure was his teacher Theevis, who helped him in his attempt to flee the city and the guild. Owing no loyalty to the guild, he "skimmed" money from jobs in order to buy himself a way out, as the guild did not let any members leave except in death.[4][2]

In the Year of the Serpent, 1359 DR, his crew, learning that he had taken extra coin from the jobs, sent a young man named "Losk Cale" to get the money from Vasen's hideout. Losk attacked Vasen, and lost the struggle. Knowing his life was about to end, the boy asked to be spared, and Vasen accepted. This was the first person he spared, and marked the beginnings of a change in Vasen's life.[4][2]

Dodging the Night Masks to go to the docks, he decided to go to his teacher and say goodbye. Theevis helped him with a hiding spell and another to remove his red hair. After his former ally Jeldis attacked him on the docks, Vasen faked his death and left Westgate on the boat Wave Runner under an assumed name. Thinking of the boy he saved, he named himself "Erevis Cale", combining the boy's last name and "Erevis" meaning "hunted" in Thorass.[4][2]

In Sembia, he joined the organization called the Night Knives, which was led by the Righteous Man, an aspiring champion of Mask, the Shadowlord. This organization placed him, at his own direction, with the wealthy mercantile Uskevren family as the head butler at Stormweather Towers in the Year of Maidens, 1361 DR,[2] in an opening he created by murdering the previous butler, to gather information that could be used against the Uskevrend. However, because of the speed and intensity with which Erevis became friends with the patriarch of the Uskevren family, Thamalon Uskevren, his loyalties split. He spent much of the decade that he worked for the Uskevrens sending misinformation back to his guild and feeding them information about merchants other than the Uskevren themselves.[5]

After a decade in service to the Uskevrens, in the Year of the Tankard, 1370 DR, his rival in the Night Knives, Drasek Riven, secretly a Zhentarim agent, contacted him saying that their next mission would be the kidnapping of Talbot Uskevren, one of Thamalon Uskevren's children. Cale agreed but was adamant in not letting that happen. He laid a trap for Riven, where Cale and his halfling friend, the priest of Brandobaris and Harper agent Jak Fleet, would attack and kill those who were to attack the caravan. The decision did come hard to him because he thought he would surely be killed by his guild for his betrayal, but he need not have worried, for it was actually Riven and the Zhentarim agents at his disposal that were trying to kidnap Talbot. Erevis and Jak Fleet, after a lot of running around and evading the Zhentarim forces, which numbered many more than a usual kidnapping would entail, ended up in a confrontation with Riven himself. Riven was a better fighter than Cale and they both knew it, but the confrontation ended when an invisible Jak stabbed Riven through the back and severely wounding him. They left him to bleed in the streets as they fled from the rest of the Zhents. Surprisingly enough, Cale and Riven met shortly afterward at their usual meeting place in a tavern with Riven sporting a garish scar after being healed, and agreed to let Cale's protection of the Uskevren, and Riven's Zhentarim ties be their little secret.[5]

Riven, at the direction of his Zhentarim superiors, assassinated the Righteous Man in the Year of the Unstrung Harp, 1371 DR, and simultaneously released the demon Yrsillar in the process. The demon then took the Righteous Man's body as a vessel to operate on the Prime Material Plane and wreak havoc in Selgaunt. He transformed those in the guildhall into ghouls. He attacked many noble families with the authorities not knowing what to do. He finally attacked Stormweather Towers and ended up hurting Thazienne Uskevren, the only daughter of Thamalon Uskevren, and putting her in a coma. Cale thought the demon was looking for him, which indeed Yrsillar was, so thought in turn that it was his fault that this had befallen Stormweather Towers. He left Stormweather in the leathers of his assassin profession to achieve what the authorities could not—defeating Yrsillar. He enlisted Jak Fleet to help him destroy Yrsillar, and the two went to the Night Knives' guildhouse, Yrsillar's impromptu base of operations. Erevis Cale and Jak Fleet infiltrated the lightly guarded guildhouse, destroyed a number of ghouls, and then went on to destroy Yrsillar himself.[6]

During this time, Cale battled with thoughts of becoming a priest of Mask. Mask even contacted him several times through dreams and premonitions and eventually Cale became a priest of Mask, but he vowed that he was his own man, and would not serve his god unless it was a benefit to himself. In any case, it was to his benefit, for it was only by Mask's intervention that Yrsillar was banished to his home plane and effectively defeated.[6]

Erevis and Riven completed a quest to steal back a portion of their god's essence, which had been stolen by Kesson Rel, a former Chosen of Mask bent on destroying all of Toril with the Shadowstorm. With the divine essence, Kesson Rel ascended to god-like status while at the same time attempting to stop the takeover of all of Sembia by the Shadovar. A powerful Shadovar priest of Shar by the name of Rivalen Tanthul aided in the destruction of Kesson Rel for the sake of the preservation of Sembia, which the Shadovar had interest in acquiring for themselves.[citation needed]

Cale, Riven, and Rivalen succeeded in killing Kesson Rel, and all received equal shares of his divinity.[citation needed]

Cale promised a portion of divine essence to both Mask and to his adventuring companion Magadon's archdevil father Mephistopheles. He made this arrangement to get back the missing half of Magadon's soul, which had been ripped from his friend's body, leaving a less-human Magadon behind. Cale was killed by Mephistopheles when he made good on his promise to return the rest of Magadon's soul, and thereby Mephistopheles absorbed the divine essence that Cale retrieved from Kesson Rel. Cale's body was frozen and placed under guard in Cania's frozen wastelands.[citation needed]

In the Year of the Awakened Sleepers, 1484 DR, it was discovered that Erevis was still alive, frozen in Cania. In order to break the Cycle of Night, he was freed from the tomb by his son Vasen Cale, who broke the icy tomb open using the sword Weaveshear. During the undoing of the Cycle, Erevis was freed of Mask's divinity, and Drasek Riven became the new incarnation of Mask.[7]

Before his newfound loyalty to Mask was formed, Erevis doubled as an assassin. The death of Thamalon marked the end of Erevis's service at the mansion, but not his loyalty to the rest of the family. He was especially protective of the only daughter of Thamalon's children, Thazienne Uskevren, with whom Erevis was once in love.[citation needed]

Erevis was once a primary rival of Drasek Riven for the attention of the leader of their assassin's guild in Selgaunt. They both operated as the first and second Chosen of Mask, of which there would eventually be five, according to prophecy. They were also referred to as the right and left hands of Mask.[citation needed]

Riven and Erevis from Dragon magazine 297. 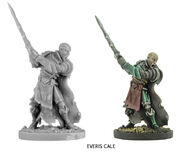 Novels
The Halls of Stormweather • Shadow's Witness • Heirs of Prophecy • Lord of Stormweather • The Erevis Cale Trilogy (Twilight Falling • Dawn of Night • Midnight's Mask) • The Twilight War (Shadowbred • Shadowstorm • Shadowrealm) • The Godborn
Referenced only
Sands of the Soul
Short Stories
Dragon #277: "Another Name for Dawn" • Dragon #297: "And All the Sinners, Saints" • Continuum