Eshpurta, the "Shield City" of Amn,[7] was a bustling military trade town in eastern Amn.[3] Before the Sothillisian War in 1370 DR, Eshpurta contained about 70,000 townsfolk with another 10,000 in the surrounding ranches and farms. Additionally, there were 25,000 Amnian troops garrisoned in the city, bringing the approximate population to 105,000. During the trade season, the population could reach 175,000.[5] During the war, a census in 1372 DR reported the population as less than 25,000,[note 1] which downgraded the once-thriving metropolis to a large city.[3]

Eshpurta was located at the confluence of Trifin Creek and the River Rimril where they merged to later join the Amstel River, which eventually flowed into Lake Esmel in the heart of Amn.[note 2] Eshpurta was south of the Snakewood, south and west of the Troll Mountains, north of Trollford, and far to the east of Keczulla along the Eshpurta Road.[8]

This fortified city had a strong military tradition and was governed by a council of six, called the Shield Council, whose members were the leaders of the local merchant families and clans. The unelected "advisor" of the Shield Council was General Labak Craumerdaun who held the position mainly by force of personality. The fact he also had troops garrisoned in the city certainly didn't hurt his standing, and the council members usually listened to his advice and even curried his favor.[5][6] The Shield Council members in early 1370 DR[9] were:[10]

Eshpurta was known as the "Shield City" because it had more troops stationed there than anywhere else in Amn. The business of the city largely revolved around the military with hundreds of blacksmiths, weaponsmiths, armorers, leatherworkers, stablekeepers, etc. which occupied the northern and western quadrants of the city. Large mining operations pulled iron and nickel out of the Troll Mountains to feed the smelters and ultimately produce the trappings of martial might. The eastern portion of the city was almost exclusively dedicated to the mining and related industries.[7] The chief exports of Eshpurta were arms, armor, military equipment and training, mercenaries, and iron ore.[5] Less lucrative but important for civic pride, the southern ward of the city was home to sculptors, artisans, and musicians.[7]

The city was naturally defended by creeks or rivers on three sides, as well as walls fortified with towers around the entire city proper. Three large gates connected the city to the major roads and the countryside. The southwest gate led to a crossing of the swiftly rushing[7] Trifin creek and the Eshpurta Road that ran westward to Keczulla. Just up from this road was the Golden Fortress, overlooking the confluence of the creek and the river. The gate in the south-southeast opened on a crossing of the River Rimril and connected to the South Road to Trollford. The north gate led to the settled countryside and eventually the Snakewood.[5][8]

Before the Sythillisian War, Eshpurta had a garrison of the Amnian Council Army 25,000 strong. This included 18,000 troops, 6,300 officers, and about 700 support personnel such as weapon and armor smiths, instructors, logistics managers, cooks, etc. In addition, the Golden Fortress housed some 3,000 trainees and the city was policed by the Shield Militia of 1,400–2,000[6] mounted officers, which was under the direction of the Shield Council.[5]

In the Year of Faltering Fires, 491 DR, Kadar el Aktorral,[11] an ambitious Calishite noble, led a group of immigrants from Tethyr and Calimshan to the lands east of Lake Esmel and founded the Duchy of Cortryn in what was formerly the halfling realm of Meiritin and the Shoon territory of Valashar. Eshpurta was established as a fishing village and was the northernmost city in Cortyrn.[12] The Duchy of Cortryn lasted until the Year of Visions, 731 DR when a beholder cult called the Ring of Eyes wiped out the ruling house and captured Cortryn. The Ring was eventually defeated and in the Year of Drifting Stars, 760 DR, Amn conquered the Duchy and added it to its territory.[13]

2e map of Amn, showing Eshpurta in the east. 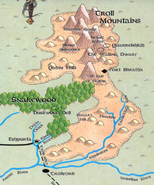 Eshpurta and the Troll Mountains
from 2nd ed. Lands of Intrigue

Castle Spulzeer map of eastern Amn.
Add a photo to this gallery

Retrieved from "https://forgottenrealms.fandom.com/wiki/Eshpurta?oldid=354292"
Community content is available under CC-BY-SA unless otherwise noted.