Ettercaps were a race of bestial, spider-like aberrations located throughout Faerûn. They were primitive, hunting aberrations that had an affinity with spiders.[citation needed]

They were not particularly intelligent. They were cowardly and vicious, preferring to set traps to ensnare their enemies.[7] Much like spiders, ettercaps tended to be solitary creatures, only gathering to mate. When ettercaps did socialize, it was with monstrous spiders, which they kept as pets and guards.[citation needed]

Ettercaps possessed the capability to shoot sticky webs.[7] Like spiders, they used webs as traps to capture prey, which was then injected with paralytic venom from the ettercap’s bite.[citation needed]

Ettercaps were very fond of spiders and other arachnids and often kept them as others kept bees. From time to time, however, an ettercap had a number of monstrous spiders as pets, which were as loyal to it as a dog to a human master.[7]

It was suggested that ettercaps were the descendants of a group of mad druids, tainted and transmogrified by their association with a powerful demon into a form resembling the predatory arachnids their cult once revered. While the vast majority had completely reverted to pure animal instinct, a rare few claimed to demonstrate the intellect and capacities of an insane human.[7]

A fiendish Ettercap as it appears in the game editor for Neverwinter Nights. 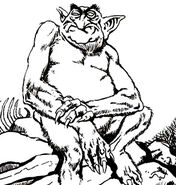 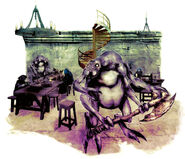 Ettercaps and dark creepers in the Scepter Tower’s feast hall.
Add a photo to this gallery