Primarily Lathander. Others by permit.[3]

Eveningstar is a small unwalled farming town of about fifty buildings located roughly 30 miles west of Arabel, in Cormyr.[4] Eveningstar is located where the High Road crosses the Starwater River.[5][6]

Eveningstar is a pastoral village surrounded by fields and orchards situated in an elbow of the Starwater River just north of the King's Forest in Cormyr. It stands at the intersection of the High Road, which runs west to High Horn and East to Arabel, and the Starwater Road (known by locals as the "Suzail Road" or "Southrun"), which runs south to the village of Dhedluk in the King's Forest (known by locals as the "Shadowood"). Immediately to the north of Eveningstar is the Eveningstar Gorge[7]or the Starwater Gorge. The gorge, formed by the Starwater River as it flows down from the Storm Horn Mountains, provides relatively easy access to the Helmlands and the Storm Horns and is the only significant break in the limestone Stonecliff that runs from Tyrluk to the west to just short of Arabel.[8]

Eveningstar is an agricultural community producing primary products such as milk, eggs, poultry, mutton, carrots, beans and parsnips, as well as value added goods such as cheese, parchment, wool and wine; all of which are sold at a weekly farmers market. Eveningstar is also a popular stopover for frequent overland caravans, who patronize the local farmers and businesses. The most important business in town is the Lonesome Tankard tavern and inn, famous in Cormyr as one of the best places to eat, drink and stay the night.[4]

As of 1368 DR, the town exported commodities such as parchment, wine and wool to Daerlun in Sembia.[9]

Like most of the settlements in this region it suffered badly in the Goblin War.[citation needed]

In 1368 DR, Eveningstar, along with Espar, Tyrluk and Waymoot, was plagued by rogue dragons.[10]

The Lonesome Tankard
The Golden Unicorn
The Welcoming Hand
An Inn destroyed during the Goblin War and rebuilt quite quickly after.[6]
The House of the Morning[4]A Temple to Lathander Morninglord
This large Temple is considered to add to the importance of Eveningstar in the general area.[6] 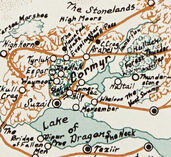 Retrieved from "https://forgottenrealms.fandom.com/wiki/Eveningstar?oldid=570432"
Community content is available under CC-BY-SA unless otherwise noted.