Forgotten Realms Wiki
Register
Don't have an account?
Sign In
Advertisement
in: Locations, Articles in need of citations, City-states,
and 21 more
English

Everlund (formerly Besander's Blockhouse[3]) was a city of merchant traders and caravan teams and was one of the greatest supporters of the league of the Silver Marches. Located southeast of Silverymoon and situated on the north bank of the River Rauvin, Everlund was the second largest city in the Silver Marches and one of its most active mercantile communities.[3]

The walled city was resettled by humans from Ascalhorn on the site of Besander's Blockhouse in 515 DR.[3] Since its humble beginnings as a fortified trading outpost and bridgehead on the Rauvin, the city's population and importance increased so that it became one of the most important trading cities in the region. [citation needed]

For nearly five hundred years, (before 1372 DR) Everlund was ruled by the Council of Elders. This group was composed of the people holding the most prominent positions in the city, although there was occasional debate over whether some civic figures were important enough to merit a seat on the council. The council was led by the First Elder, an office granted by vote of the others. The First Elder held this position until another member challenged it; sometimes this post was held for many years, other times a few days. Kayl Moorwalker was the First Elder as of 1372 DR.

The city was defended by the Army of the Vale.[4] The city's barracks and armory were located on the south bank of the River Rauvin between the Knightbridge and Dwarfbridge.[5]

The Great Armory was a walled compound overlooking the waterfront that served as a barracks.[6] The Hall of the Elders was where the Council of Elders met and was located on the east side of the Bell Market. The Hall of Records and the Hall of Redress were the courts of Everlund.[7]

The Bell Market was the geographical, economic, and social center of Everlund.[8] It was bordered by the Knightbridge and the River Rauvin to the south and the Hall of the Elders to the north.[5]

Everlund was home to the Bent Bow Bowyer, an archery shop, and Hethmeir's Highboots, a boot shop.[9]

Taverns in Everlund included the Dreaming Dragon, a tavern frequented by elves and halflings, and the Stag at Bay, a bar that catered to hunters and adventurers.[10] By the Year of Wild Magic, 1372 DR, a new tavern had been built in the west part of town called the Missing Minotaur. It was favored by the rougher elements that were not often welcome at the more established bars.[11]

Moongleam Tower was the Harper base in Everlund.[12] It was located along the northern wall.[5] The Arcane Brotherhood was also known to have a presence in Everlund.[11] As of 1372 DR, other small, local groups included:

The two bridges in Everlund were named Knightbridge (west) and Dwarfbridge (east), both of which crossed the River Rauvin.[5]

Evergreen Hall was a temple of Mielikki located just outside the western wall on the north bank of the river.[5] The Grotto was an area devoted to Shiallia. The Keep of Vigilance was a temple of Helm near the Upriver Gate. The Starmeadow was an area devoted to Corellon Larethian. Also located in Everlund were shrines to Oghma, Shaundakul (popular with the caravan masters), and Waukeen.[citation needed]

Everlund was the final destination on the Evermoor Way, the primary trade route from the south and west.[14] The road to the north, eventually reaching Silverymoon, passed through Everlund Pass at the western end of the Nether Mountains. Trade to the east followed the trail between Everlund and Sundabar, which traced the banks of the River Rauvin, reaching Sundabar as its final destination. Points of interest along this trail (in order from Everlund to Sundabar) included Hilltop, Jalanthar, Lhuvenhead, and Rauvincross.[14]

Everlund and environs, circa 1372 DR. 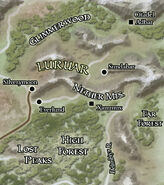 Everlund and environs, circa 1479 DR.