Forgotten Realms Wiki
Register
Don't have an account?
Sign In
Advertisement
in: Locations, Articles in need of citations, Countries,
and 9 more
English

The island nation Evermeet, occasionally known as the Green Isle,[1][2] was the last true kingdom of,[5] and the final destination for all non-drow Tel'Quessir ("elves") on Faerûn.[6] Very few non-elves have ever been permitted to visit.[citation needed]

Much of Evermeet's architecture was created by magical means, most notably by the use of the spell construction.[7]

Evermeet Sparkling Wanderale was a fizzy drink imported from Evermeet Island and favored by many sun elves.[8]

Evermeet was home to faint fey spirits almost forgotten by the elves, but in the 1400s DR, the Evermeet warlocks learned of them and made fey pacts with them. These spirits granted these warlocks enhanced powers of teleportation and debilitation of their enemies.[9]

Prior to the Spellplague, Evermeet was ruled by Queen Amlaruil Moonflower,[6] who resided within the capital city of Leuthilspar.[10] The Sad Queen, as Amlaruil had become known, depended heavily on her Council of Matrons for advice. Although the queen had male advisers as well, none of them formed part of her court.[6]

The Queen's High Council on the other hand included some prominent males. It consisted of:[11]

While tradition decrees the High Council serves at the pleasure of the Elven Throne and the current reigning monarch, the members appointed to the council were just as traditionally powerful in their own right, and their opinions did not always coincide with that of the reigning king or queen.[12]

As of 1479 DR, after the tumultuous events of the Spellplague, Queen Amlaruil was gone and her reign replaced with the governance of her high council, renamed the Royal Council. They were set to rule until a suitable heir could be found.[13]

The isle of Evermeet was protected by a battery of defenses, both naturally-occurring and magically-created by the Seldarine. The island itself was shrouded in a powerful illusion, crafted by the deity Sehanine Moonbow, that concealed its view from non-elven eyes. Smaller illusory spells gave the appearance of phantom keys, reefs and other nautical hazards that would ward off seafaring races.[14]

In the Sea of Swords, a series of intricately patterned water currents and benign gusts of wind, created by Aerdrie Faenya, placidly turned away non-elven ships that approached the Green Isle. Beyond the redirecting weather, closer to the island, was a region of defensive storms and destructive cyclones. Massive water spouts emerged from the sea, surrounded incoming vessels, and could outright destroy them.[14]

Further in towards the isle was a maze of reefs, sandbanks and regions of shallow water that made safe passage all-but impossible without knowledge of the route between the hazards. This path was known only to the sea elves of the region and select elven navigators and pilots.[15]

Several great aquatic creatures were magically persuaded to defend the Evermeet. Among the isle's known protectors were a kraken, a leviathan and a dragon turtle.[15] The alu-Tel'Quessir, and their dolphin allies, served as sub-aquatic defenders against scrags or sahuagin.[16]

The navy of the monarchy of Evermeet was known as one of the finest in all of Toril. Among the fleet were sleek and graceful swanships, powerful dragonships and four massive wardragons.[15] When called upon, Evermeet's fleet mages wielded a unique and powerful form of arcane fire known as Vhoorflame.[17]

The elves of Evermeet maintained several groups of mounted aerial combatants. Among these were:

Pegasus Cavalry
This battalion of over 1000 plate-armored sun elves defended the skies of their kingdom mounted upon pegasi from the Eagle Hills[18]
Eagle Riders
These wild and flamboyant moon elves, and the giant eagles whom they rode into battle, inspired pride in their nation and fear in their enemies[16]
Dragon Riders
Beneath the fortress of Sumbrar were 12 slumbering ancient dragons and their riders, long-dead legendary elven warriors unaware of their continued existence
Aerial Navy
The island of Evermeet was defended by a fleet of six aerial, and spelljamming-capable, Ruathimaer warships[16]

The standing army of Evermeet was a small, but elite force of warriors comprised of the various elven sub-species. Many sun elves served as mounted heavy cavalry atop their moon-horse steeds.[19]

The north of the island was made up of rugged terrain with steep headlands and covered in dark pine forest.[20]

The eastern shore was heavily forested with oaks and evergreen right up to the calm, deep blue waters of the sea.[21]

Leuthilspar
The stunning capital of city of Evermeet served as the heart of the Elves culture following the destruction of Myth Drannor;[5] It was home to many prominent Tel'Quessir houses[23]
Taltempla
Also known as the City of Magic, this harmonious settlement was magically crafted entirely from white and green marble[24]
Ruith
A large coastal city, strategically located near the capital, that was home to a large part of the elite elven military forces[24]

The island was created by an elven high magic ritual around −17,600 DR.[4] The ritual's goal was to summon a piece of Arvandor into the Prime Material plane and to keep it bound there as a protected homeland for the elves, isolated from the rest of the world. The ritual, however, killed countless people and ripped apart the continents of Toril in the cataclysmic event that became known as the First Sundering.[28]

The Evermeet archipelago was the main elven base during the First and Second Unhuman Wars, as well as a major base for the Elven Imperial Fleet and all spacefaring elven nations.[29]

Many have tried to invade the island over the years, including the Red Wizards, the Zhentarim, the drow and various pirates of the Sword Coast and the Trackless Sea.[citation needed]

Following the scro invasion of Realmspace in the Year of the Turret, 1360 DR during the Second Unhuman War, the spelljammer fleet of Evermeet was deployed to reinforce the Elven Imperial Fleet in their efforts to repeal the scro. After more than a dozen battles, the scro forces were finally forced to retreat from the crystal sphere.[30]

In the Year of the Unstrung Harp, 1371 DR, an invasion force led by Kymil Nimesin made it past the island's defenses and finally brought war to the elven retreat. With help from Lloth, Kymil Nimesin successfully arranged for the Ityak-Ortheel, a creature of Malar, to be brought to the island. Lloth was also responsible for rendering all elfgates inoperable by linking them all to a single entity in a gem held by Kymil Nimesin, thereby preventing notables like Laeral Silverhand and Khelben Arunsun from rendering aid.[31]

In the Year of Lightning Storms, 1374 DR the Island Kingdom was assaulted by Daemonfey. These demonic Tel'Quessir, who were imprisoned as a means of punishment for consorting with demons, raided Tower Reilloch, a tower of mages in Evermeet. They sought a piece of a legendary artifact that, when made whole, had the power to release the imprisoned army of the Daemonfey. While doing so they planted a lore gem containing information that no Daemonfey could access, in an attempt to trick the Tel'Quessir into unlocking it and handing them the information. Evermeet unofficially sent an army to Faerûn under the command of Lord Seiveril Miritar, a priest of Corellon Larethian, to assist the Tel'Quessir of Evereska and the High Forest in their fight against the Daemonfey. After successfully repelling the daemonfey in Evereska, Seiveril's army pursued their foe to Cormanthyr.[citation needed]

In the Year of Blue Fire, 1385 DR, when the Spellplague struck and ravaged across Faerûn, contact was lost with Evermeet. All of the permanent portals ceased functioning and efforts by the other fey kingdoms on Faerûn to reestablish contact have failed, and it is largely thought that Evermeet was destroyed. What is little known is that Evermeet was in fact transported into the Feywild and persists there. Only an echo of the physical island, without any structures or inhabitants, remained Toril.[13]

As of the Year of the Ageless One, 1479 DR, the settlements of Evermeet resided primarily in the Feywild, the inhabited cities having all but disappeared from the Prime Material Plane. Queen Amlaruil Moonflower was gone, and a Royal Council ruled in her place. However, the natural landscape of the island itself remains on the Prime, albeit uninhabited and with strong ties to its fey counterpart.[13]

It did sometimes act as a crossover between the Feywild and Faerûn and could only be accessed by those who knew the secret route.[32]

With the end of the Second Sundering in the 1480s DR, Evermeet returned to Toril, although it dwelt in a state of coexistence between the Prime, the Feywild, and Arvandor.[33][34] 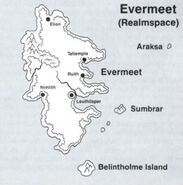 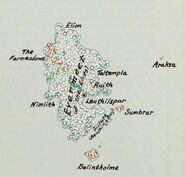