Eye of the Beholder (game)

Eye of the Beholder (game) is a Featured Source! It is one of the best documented and most complete sources on the Forgotten Realms Wiki.
However, if you can update it or further improve it, then please feel free to contribute.
This article is about the game. For the statue in Zhentil Keep, see Eye of the Beholder (statue).

Eye of the Beholder

Eye of the Beholder series

Eye of the Beholder II: The Legend of Darkmoon

5¼-inch floppy disk
3½-inch floppy disk
Cartridge
CD-ROM
Eye of the Beholder is a computer game released in 1991. It was developed by Westwood Associates and published by Strategic Simulations, Inc. for DOS, Amiga, Sega CD, SNES and PC-9800. It is the first game of the Eye of the Beholder series.
“
Darkness has engulfed the town of Waterdeep and legend has it that the criminal conspiracy behind it is hiding in the sewers. The locks and the traps in the twisting labyrinth beneath Waterdeep are too good and Skeletons and Kobolds lurk around every corner. Who could be at the heart of this evil? And can anyone survive to find out?

In Eye of the Beholder, you take control of a band of four adventurers as they seek to unravel the mysteries beneath Waterdeep. Using an easy to use "Point and Click" interface and 3-D point of view, you become part of the action as you do battle with Mind Flayers and Mantis Warriors who seek to put an end to your mission to purge Waterdeep of the evil.

The lords of the city of Waterdeep have grown concerned with mysterious happenings within the city. Luckily, Khelben "Blackstaff" Arunsun looks into lords' concerns — that an unknown evil poses a threat to Waterdeep. There are rumors of assassins wondering the streets, so the mage visits both Amn and Calimshan, as such places had given Waterdeep issues in the past. He, however, finds no evidence of devious plots outside of Waterdeep, and believes such evils must be coming from within. Arunsun's informants are clear on one thing — the word Xanathar recurs with great persistence.

The wizard uses his mages to detect evil, but cannot locate its exact source. After this, Khelben writes to Piergeiron the Paladinson, Open Lord of Waterdeep. He warns that the evil must come from inside Waterdeep, or more, under their very noses. Khelben returns to the council and tells Piergeiron to hire adventurers to look where they haven't — under the city. The council holds a ceremony, and write up an official document known as the commission and letter of Marque, and sends the adventurers away to prepare.

Two days before the adventuring group are due to search underground, the captain of the guard intercepts a drow scout that is spying on the council. Under interrogation, the drow reveals the disturbing plan of an evil beholder (who had recently teleported the elf to the surface). The spy reveals that the beholder crime lord, Xanathar, inhabits the lowest parts of the Waterdeep sewer system. The guards confiscate the drow's package of information, and Khelben sends it to the adventuring group.

With the official document, basic adventuring gear and a package of information, the adventurers enter the city's sewer system. As they descend, the entrance gets blocked by a sudden collapse, all planned by Xanathar. The team descends further beneath the city, going through dwarf and drow territory, to Xanathar's lair, where the final confrontation takes place. The party slay the evil beholder and present his eye stalk to the Lords of Waterdeep. The lords rejoice, and confer on the party the honorary name: the Heroes of Waterdeep.

Back cover of the SNES edition.

Back cover of Amiga and DOS editions. 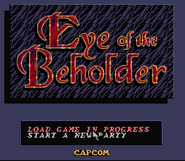 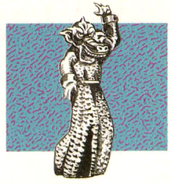 A mind flayer from the Japanese version of the game.