Forgotten Realms Wiki
Register
Don't have an account?
Sign In
Advertisement
in: Buildings, Locations, Rated 3 tankards by Volo,
and 8 more

The Fallen Tower was a former mage's tower and one of the most popular taverns in the city of Neverwinter during the mid-to-late 14th century DR. It was famed for its uniqe nightly magical manifestation.[1][2] It was re-opened by orcs over a century later and served as neutral ground between Many-Arrows and Neverwinter.[3]

In the Neverwinter of the late 15th century, the Fallen Tower lay near the northeastern edge of the city, in its River District. It marked the limit of human control of the area, with the Neverwinter Guard usually only patrolling up to here and no further.[3]

The tavern was constructed of fieldstone and circular in shape, owing to its origin as a ruined mage's tower. The stones of the collapsed upper section were reused to construct a single-story add-on. The wine cellar and staff rooms were in the original circular structure, while the taproom was in the add-on. The privies were situated at the furthest end, sitting over a cesspit.[1][2]

Under the tower were a set of cellars that predated its construction. The cellars were deep; just how deep was unknown. Some speculated these were once an abandoned and cut-off part of a dwarven stronghold or even a portion of the Underdark.[4][2]

Looking like a typical tavern, the Fallen Tower had a low-beamed ceiling, dim lighting, and the rough log-cut furniture basic but serviceable.[1][2]

As Neverwinter's most popular tavern in the 1360s DR, all visitors to the city were encouraged to visit at some point. But, at first sight, all would be disappointed to find a distinctly average drinking hole little different from dozens of other roadside taverns. In fact, its single selling point was its grisly nightly magical display.[1][2] This popularity continued into the 15th century DR.[3]

The former mage's tower was the home of a local wizard of some note, Llomnauvel "Firehands" Oloadhin. He was obsessed with mastering magic and then using it to seize power in Neverwinter. Fortunately for the city, he would not get the chance. His tower was invaded circa 1335 DR by members of the Arcane Brotherhood led by Overwizard Glagorn intent on stealing his magic for themselves. But Llomnauvel was prepared and spell-battle erupted, with magic flying like meteors through the night and mages turned to marine creatures flung into the sea. But he was not able to defeat them all and when the maddened Firehands made his last stand, his final fiery spell destroyed the tower, the remaining mages, and himself.[1][2]

Apart from the ruins of the tower, a bizarre after-affect was the nightly apparition of the last-surviving mages falling off where the tower had been in their gruesome death throes. It happened regular as clockwork and never ceased. Spells like dispel magic were attempted a number of times without success.[1][2]

So, naturally, people turned it into entertainment, and built a tavern around it.[1]

Around 1353 DR, a wizard (a suspected Zhentarim mageling) visited the Fallen Tower to search for Llomnauvel's lost magic. Instead, he got into a fight with another patron and hurled at him a deadly spell that conjured a flying knife. The target happened to be an archmage, who turned the knife into two-dozen duplicates and turned them back, slicing the wizard to death. Simultaneously, the slain wizard's two small trunks teleported away.[4][2]

Volo visited the Fallen Tower in the mid-1360s DR and wrote about it in his guidebook.[1]

The Fallen Tower and its gruesome spectacle remained popular into the 15th century, but the cause of the apparition was forgotten. Instead, it became supposed the mages died in the Spellplague of 1385 DR.[3][note 2]

However, following the Ruining of Neverwinter in the Year of Knowledge Unearthed, 1451 DR, the Fallen Tower was left vacant. Then, when a tribe of orcs from Many-Arrows invaded the River District in the late 1470s DR, they discovered the Fallen Tower. More specifically, they discovered its wine store. Their celebration was the appearance of the falling mages and ran in fright, returning for their wine when it was clear there was no danger. In time, they reopened the tavern.[3]

By 1479 DR, the place became neutral ground for the Many-Arrows orcs, the Neverwinter Guard, and other factions while the orc forces occupied the River District. Any the orcs deemed worthy could share a drink or few with them, and didn't harass anyone who came to drink or deal there. It was the site of negotiations between Lord Dagult Neverember and orc leader Vansi Bloodscar.[3]

Circa 1479 DR, Vagdru One-Ear took on the role of bartender and food-seller. They had no need for bouncers, as all patrons were armed and ready to retaliate against those who broke the tavern truce.[3]

In the 1360s DR, the Fallen Tower offered a good range of drinks, with many types of ale, lager, sherry, brandy, and wine, and more unusual beverages like elverquisst and zzar. A tankard or tallglass cost one 2 cp for ale; 3 cp for stout or mead, 5 cp for fruit liqueur, 7 cp for zzar, 10 cp for brandies and sherries, 3 sp for whiskey, 2 gp for firewine, and 6 gp for elverquisst. Food, meanwhile, was limited to only spicy sausages, turtle soup, and brown bread with garlic butter. The food was salted to encourage diners to drink more.[1]

But the real attraction of the Fallen Tower was the regular manifestation of several mages falling to their horrible deaths. This occurred late each night at the exact same time—the same time the original tower was the destroyed and the mages slain—and the tavernmaster often rang a bell over the bar to warn the patrons, who fell silent in respect and rushed closer for a better look. The images were silent but appeared clear and solid, and they appeared through the ceiling and disappeared through the floor; the tavern put a railing around it. The first two were Arcane Brotherhood mages, with terrified faces and limbs on fire and falling like ragdolls. Next came Overwizard Glagorn, struggling as his own limbs turned to eels that bit his body and dived down his screaming throat; he appeared astonished more than anything. Last was Llomnauvel, who fell upright even as his robes and flesh dissolved into spiraling lightning, beginning with his legs already skeletal and leaving only a skull with an exultant but horrible grin as he passed through the floor. The show was free of charge.[1][2][3]

For 4 gp per person, treasure-hunting adventurers were allowed to explore the cellars, and even the cesspit. Not everyone returned from this.[4][2]

In the late 15th century DR, the orcs placed a cookfire directly beneath the falling mages. Hungry patrons were given raw meat (source uncertain) they could roast in the fire, or not.[3]

Although Llomnauvel's last spell drained the magic from all enchanted items in the tower,[1] leaving not even a scroll, rumors persisted there was still something to be found, if not magic then treasure. Adventurers and mages sometimes explored the cellars in hopes of finding something. Of those who returned, none reported finding anything.[4][2]

Yet more stories told that Llomnauvel had been breeding monsters as guardians, creating a whole army of them. Bulettes, bonebats, gibbering mouthers, mimics, and more were all claimed. Such stories went on to say the monsters were stored in stasis bubbles in the cellars, but these failed over time or because of disturbance, unleashed the monsters to prowl the cellars.[4][2]

One last tale was the destination and contents of the suspected Zhent mageling's lost luggage. A local rumor was that they hadn't gone far, maybe teleporting into the known cellar, into a hidden underground chamber, or even into the cesspit.[4][2]

The origin of the Fallen Tower and its apparitions have shifted over time, as described above. Yet, based on only the limited description in the Neverwinter Campaign Setting, the Neverwinter MMORPG alters and develops the Fallen Tower significantly further, making it a wizard's guild tower (perhaps confused with the Cloak Tower) that fell in the Spellplague. Moreover, the tower is vastly bigger and updates to the game have seen a broken-off section put back in place and suspended in the air. Finally, rather than four bodies falling outside the old tower each night, they fall in a continuous rain in a column of light through the center. Naturally, the tavern proper is inside the old tower. This description and history appears irreconcilable with that in Volo's Guide to the North and Neverwinter Campaign Setting and hence is excluded here, apart from some of the images above, with the rest in the gallery. Please see Archmage Ricven for more on this other Fallen Tower. 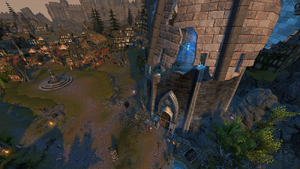 Screenshot of the tavern from Neverwinter. 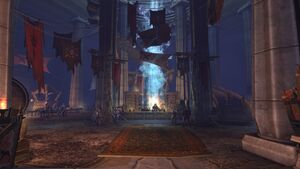 Guardsmen and orcs drinking alongside one another.