Red or orange
A fang dragon, also known as a gray dragon,[7][note 1] was a type of dragon found in Faerûn.[3]

Fang dragons were poor flyers, with small muscled wings. Their eyes tended to be either red or orange. Their heads were edged with spikes or horns. Their bodies tended to be covered in bony plates that ended in spurs at the joints, and their tails were forked with scythe-like tips.[3] Their scale colors were a muddy mix of gray and brown.[1]

These dragons were susceptible to seemingly random outbursts of rage and violence. They were exceptionally cruel, and had a tendency to "play" with their food. However, if backed into a corner, they were quick to bargain for their lives.[3]

They could perfectly mimic any sound or voice which they had previously heard.[3][8]

Fang dragons were skilled at physical combat, particularly because their bodies were so lethal.[3] They could use their muscled wings for quick forward lunges, using their tails to trip opponents and their claws to slash, all the while menacing their foes with the bony spurs all over their bodies.[1]

The bite of a fang dragon could drain the life force from a victim,[3][1] however they did not have a breath weapon until Tiamat changed them, at which point the improved gray dragons had an acid breath weapon.[9]

Fang dragons had the innate yet limited ability to cast a number of spells, namely detect magic, read magic, shield, telekinesis, dispel magic, spell turning, and globe of invulnerability.[8] They developed these powers as they aged, and the eldest of fang dragons had the ability to regenerate. However, fang dragons' magic was not particularly powerful as compared to most other types of dragons, and thus some supplemented their powers with the use of magic items.[1]

Their diet consisted of flesh, of which they preferred that of intelligent mammals.[1]

Fang dragons made their homes in rocky areas.[1] They sometimes sealed up their lairs with boulders or other materials before leaving them, usually in the hunt for food, which they preferred to find far from their homes.[3]

They typically spoke bits and pieces of a handful of languages, and they used this ability in order to negotiate their way out of situations that could result in difficult or even deadly battles.[3]

Although cruel and aggressive, a fang dragon never attacked another of its kind. They generally mated once every sixty years, but did not form family units.[1]

Fang dragons were a favored monster of the deities Iyachtu Xvim and Malar.[10]

They had an instinctive and mutual dislike of red dragons.[1]

Fang dragons were first encountered in the ruins of Myth Drannor, which has led to speculation that they were connected to the demonic inhabitants that resided there after its fall. They could also be found, as of 1372 DR, in the Starwood in Cormanthor, the Border Forest, Spiderhaunt Woods, and other forest areas of the Dalelands, the Moonsea and Sembia.[8]

At some point, the goddess Tiamat chose to subject fang dragon eggs to a ritual that "improved" the hatchlings by giving them a breath weapon. After that point they were known almost solely as "gray dragons." She charged all gray dragons with purifying the species by killing any known fang dragons.[9]

Adventures
Shadowdale: The Scouring of the Land
Referenced only
The Twilight Tomb
Novels
The Rite • Elminster's Daughter • Plague of Spells • The Spectral Blaze
Card Games
Magic: The Gathering (CLB) 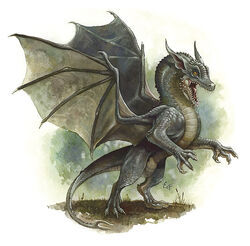