Monstrous Compendium Forgotten Realms Appendix (MC11)
A feyr (pronounced: /fɛɑːr/ fear[2]), or fihyr, was a chaotic creature that was formed from the nightmares of ordinary denizens, and dormant magical energy. They were unknowingly created in large settlements, such as cities, where they fed off emotions produced by the populace. There were four distinct types of feyr: larval, lesser, common, and great (sometimes called greater).[4]

Great feyrs were extremely rare, as they were created by the joining of many smaller feyrs, which were already a rarity. These great feyrs, however, were extraordinarily terrifying, able to directly control the emotions of a person or creature. They drove mortals mad with fear and emotional torment.[2][1][4]

Feyrs were grim and vile to the human eye. They had up to five eyes, and their mottled iridescent hide was warped like the folds of a human brain. They typically had two large tentacle-like legs growing where a pair of ears usually would on a face. Its face was spread across its whole body, and its large mouths boasted several pairs of teeth.[2]

Feyrs used their monstrously large jaws to attack. These were purely for attacking, as the monsters fed off of emotions, not typical food. As they were created by magical energy, feyrs could easily instill fear in their enemies, but great feyrs could directly manipulate their emotions, similar to the wizard spell, emotion.[2][4]

Common feyrs could be slain by sunlight (and thus didn't live long), but greater feyrs could not. This, as well as their high intelligence, would allow them to live for much longer.[2]

Feyrs were most likely to be found on their own, or in small groups. However, there were times when common feyrs combined into a highly intelligent, greater feyr. Common feyrs did not travel long distances, but the greater ones would, if lured by very strong emotional states. Greater feyrs preferred to work at night, in order to get their fill without detection.[2][1][4]

They were mainly found in large cities, with a presence of priests and wizards. Feyrs preferred highly populated areas, to feed and grow stronger. These aberrations would wreck havoc in such areas. Towns under siege, civil wars, and highly oppressed societies were some of the possible breeding grounds of feyrs.[2] For example, in 1368 DR, the denizens living near Boareskyr Bridge felt that they were doomed by the chaotic crusade of Caelar Argent. The residual magical energy, as well as the negative emotions of the people, spawned a great feyr.[5]

Greater feyrs could make other creatures their familiars, by invoking terror in their minds.[4]

Although both feyrs and great feyrs were very rare creatures, they were reported in: 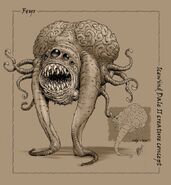 Descriptive illustration of a feyr from Dragon Magazine Annual 2000.

An image of a feyr attacking from Dragon Magazine Annual 2000. 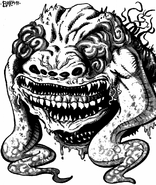 A feyr as pictured in the Monstrous Compendium.

A feyr (middle) on the cover of the Monstrous Compendium.

A pair of feyrs stalking a party in Icewind Dale II.

Attack animation of a feyr from Icewind Dale II.

Front and side views of a pair of feyrs. 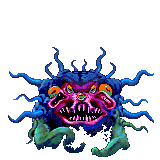 A feyr from 3DO's Advanced Dungeons & Dragons: Slayer (1995).
Add a photo to this gallery

Retrieved from "https://forgottenrealms.fandom.com/wiki/Feyr?oldid=648947"
Community content is available under CC-BY-SA unless otherwise noted.