Understands the languages of its creator but can't speak[1]

500 lb (230 kg)[3]
A flesh golem was a ghoulish collection of body parts, stitched together into a single composite form.[3]

Flesh golems were ghoulish, macabre horrors standing 8 feet (2.4 meters) tall, and weighing about 500 pounds (230 kilograms). They walked and moved with a stiff-jointed gait, as if not in complete control of their body. A flesh golem could not speak, although it could emit a hoarse roar of sorts. It wore whatever clothing its creator wished, though usually, it was just a ragged pair of trousers and normally carried no possessions or weapons.[3]

While typically mindless, a flesh golem would sometimes possess the memories of the beings from which it was created. In such instances, they might eventually become intelligent, free-willed beings.[citation needed]

Flesh golems were constructed using the physical body parts of once-living creatures. These would have to be collected from at least six different corpses, one for the torso, head (including the brain), and each limb, though sometimes more bodies were needed. The bodies used were often of humanoids or monstrous humanoids, but any physical living creature's parts are usable. Special unguents and bindings were required to keep the flesh bound together during creation.[3]

The spells animate dead, bull's strength, geas/quest, and limited wish were used in the creation of a flesh golem. The monetary cost of its construction was around 10,500 gold pieces.[3]

When a flesh golem engaged in combat, there was a small, but cumulative chance that its elemental spirit would break free and it would go berserk. The uncontrolled abomination would go on a rampage, attacking the nearest living creature or smashing some object smaller than itself if no creature was within reach, then moving on to spread more destruction. If the golem's creator was close enough, they could try to regain control by speaking firmly and persuasively to the golem.[citation needed]

A flesh golem, like other similar constructs, was immune to any Spell that could be resisted. Magical fire was capable of damaging flesh golems and cold was able to slow them. Magical electrical discharges actually healed a damaged flesh golem, and if they were not damaged, they would actually grow in strength.[3] 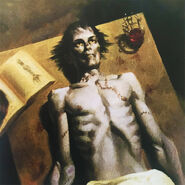 A flesh golem in the process of being animated.

A depiction of a flesh golem from Neverwinter Nights. 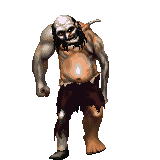 Adventures
Dungeon #19: "House of Cards" • The Accursed Tower • Curse of Strahd • Tomb of Annihilation • Waterdeep: Dungeon of the Mad Mage • Baldur's Gate: Descent into Avernus
Video Games
Dungeon Hack • Baldur's Gate: The Black Pits • Idle Champions of the Forgotten Realms • Neverwinter Nights: Tyrants of the Moonsea
Board Games
Faerûn Under Siege • Tyrants of the Underdark: Aberrations and Undead
Card Games
Spellfire: Master the Magic • Dragonfire (Shadows Over Dragonspear Castle)
Organized Play & Licensed Adventures
Tyranny in Phlan • Mayhem in the Earthspur Mines • The Howling Void • A Change of Address • In the Garden of Evil