Edit
This article is about the deformed giants. For the ant-like hiveminded monster, see Formian.

The Feywild (Feydark) and the Underdark[1]

Fomorian (Irish)
Fomorians were a race of giant-kin hideously deformed by an ancient curse,[8] considered to be the most hideous and wicked of all the giant races.[5][6][9]

The deformities that fomorians had varied widely between individuals. These included such things as randomly distributed facial features (e.g., eyes on the sides of their head), disproportionate[8][5][6] or crooked limbs, humpbacks,[2][5][6] long pointed heads, flapping ears, large noses, or mouths that were either gaping or tiny.[5][6]

General features shared by all fomorians was a skin tone that ranged from purple-gray[2] to pale-white, varying degrees of large warts scattered across their body,[5][6] and one eye that was larger than other. This eye, known as their "evil eye," had a cat-like iris and varied in color.[2]

Hairlessness was relatively common among fomorians of both sexes[2] though some were known to have scattered patches of hair that were as tough as wire.[5][6] There was no single odor associated with them — some were completely lacking, while others smelled strongly due to having overactive sweat glands.[5]

Due to their deformities they largely wore mere scraps of cloth,[8] though some were known to dress in kilts and tabards of fine quality.[2][note 1] They tended to work any bits of metal or pieces of armor they could find and scavenge into their clothes for added protection.[5][6]

Fomorians were known to be very chaotic evil-aligned creatures, greedy and disloyal by nature.[8]

Due to sometimes having enlarged ears and/or noses,[6] as well as the grotesque positioning of their sensory organs, fomorians possessed keen perceptive abilities that made it hard to sneak up on them.[8][5][6] Their deformities were also said to render them immune to all forms of lycanthropy.[10]

Fomorians were capable of passing their race's curse on to other creatures, which was a remnant of their race's lost spellcasting abilities. This was done by staring at creatures within 60 feet (18 meters) of them with their "evil eye." Those afflicted would temporarily have their bodies twisted and deformed, subjected to the malice and pain they live with,[8] and in some cases even immobilize them.[2]

Some fomorians became so obsessed with beauty that they took on the role of a witch. Such fomorians learned how to use their "evil eye" as a source of magic and how to alter bodies through alchemy. They primarily used these to alter their own bodies into more desirable forms, but being unable to perfect themselves these witches were often driven to using their powers to find or create flaws in other people.[11]

Due to their deformities, fomorians were incapable of throwing boulders the way other giants did.[5][6][8] In combat they utilized all varieties of blunt weaponry.[5] They were often known to wield greatclubs,[8] flails, maces,[2] and giant-sized bolas. The strongest among them would wield crude shields and typically had better armor.[6][note 2]

A typical strategy for them was to sneak up behind their opponents and hit them as hard as possible.[5]

The progenitor of this race was one of the four sons that the giant goddess Othea produced from her union with Ulutiu.[12]

Fomorians were once an incredibly beautiful race, the most handsome of all giants.[8][13] During that time they lived in the Feywild and were allies with the plane's elves.[13]

However, over time the Fomorians' hearts became twisted by a lust for power and magic that drove them to try and conquer the Feywild. They sought to enslave its inhabitants and take their magic for themselves. The fey ultimately fought back against them and subjected their race to a curse. This warped their bodies to reflect the evil within their hearts and robbed them of their spellcasting abilities. The fomorians would then flee from the light of the surface world, down into the Feydark and Underdark.[8][13]

Circa −2000 DR, after forces on the Moonshae Isles united against the unleashed Kazgaroth, Malar brought fomorians over from the Feywild to be its allies. The conflict dragged on for decades until the minions of Kazgaroth were driven to isolated corners of the Moonshaes. The fomorians conquered the firbolgs, forcing them into slavery.[14]

Circa −500 DR, most of the fey, including the fomorians, abandoned their domains in the Moonshaes and retreated back into the Feywild.[14]

In 1369 DR, fomorians were among the alliance of giant-kin that sieged the Wynn Castle to retrieve Queen Brianna and her newborn child.[15]

Following the Spellplague, a group of fomorians loyal to Queen Connomae and their servitors entered parts of the Moonshae Isles from the Feywild, taking up residence in Dernall Forest and conquering Oman's Isle in 1479 DR.[16]

Fomorian society was based around viciousness, with the cruelest and strongest among them typically taking the role of leader. They were also highly patriarchal, typically treating their women and children no better than slaves.[3][5] Acts of violence were common among them.[5]

In the Feydark, fomorian rulers were typically known to enforce their rule through fear and oppression. They were notorious for being incredibly paranoid, fearful of insurrection, and having extensive spy networks that they relied on to oversee their domains. This paranoia wasn't unwarranted through, for fomorians often plotted against one another and schemed to usurp the power of those who ruled them.[17]

Fomorians could live on little to no food for many weeks. Some typical foods eaten by those underground included fungi, lichen, various types of plants, bats, fish, and mice. They especially favored the taste of large mammals.[5]

Fomorians were primarily known to inhabit the Underdark[8] and its counterpart in the Feywild, the Feydark.[18] They could be found throughout the Underdark, but were most prevalent in the Middledark. Proper cities or holdings were unheard of to most creatures in the Underdark,[9] though all-fomorian settlements certainly existed.[19]

Their lairs within the Underdark typically were abundant in fish, water, and mushroom forests. They marked their territories in a variety of macabre manners, such as painting their cavern walls with blood, stitching together limbs and body parts to make mockeries of the creatures killed, or simply by using the corpses of their enemies.[8] Beyond these underground realms, solitary fomorians were occasionally found in mountain caves and abandoned mines.[5][6]

In northwest Faerûn, a clan of fomorians lived in the southern arm of the Spine of the World, near the Dungeon of the Ruins.[20] In the region of Anauroch, they could be found in the Plain of Standing Stones. In Anauroch, they could occasionally be found in the fertile areas of the Plain of Standing Stones,[21][22] where they competed with local hill giants for resources and would even resort to eating the flesh of other giants.[22]

In the Underdark they were known to inhabit Tethyamar and the kingdom of Xothaerin, the latter of which was home to scattered tribes.[23]

In the Feydark, fomorians lived in incredibly large caves full of glowing crystals and bioluminescent fungi.[2] Those who lived in the Feydark could easily enter the Prime Material Plane through portals, fey crossroads, and their own ritual magic.[18] Their largest domains on that plane were Harrowhame, Mag Tureah, and Vor Thomil.[24] These domains had no central court organizing or ruling over them all.[25]

Fomorians were typically known to speak Giant and Undercommon.[8]

Some claimed that fomorians held esteem for no deities,[2] however, they were primarily seen to worship the deity Karontor and considered him to be their patron deity.[19][28]

Most fomorians believed that the prophesied king of giants would be born as a fomorian and would not realize his destiny at first, but when he did, he would be transformed into a giant larger than any titan, and subsequently transform the entire fomorian race also.[7]

Within the Ordning, fomorians like other giant-kin were considered "maug".[29] Among giantkind, the only races that were known to tolerate them were frost giants, hill giants, and ogres. A large number of the fomorians that inhabited the Ice Spires region were known to perform manual labor for them, jobs that were often dangerous or distasteful, in exchange for food and lodging of poor quality.[19]

They were known to forge alliances with other creatures when it suited them[8] or when completely dominated. Such agreements typically lasted only as long as a fomorian feared their cohorts or until their interests no longer coincided.[5] However, fomorians were also likely to just betray their allies on a whim due to their disloyal nature.[8]

Among the denizens of the Feywild, fomorians were almost never members of the Seelie and Unseelie courts.[30] Throughout their existence, eladrin were one of the races most hated by fomorians due to their world views being such polar opposites.[17] Along with their cyclops servants, fomorians were considered the Feydark's greatest organized threat to that race.[31]

Fomorians were often known to engage in slavery.[8] With some of the creatures they were known to enslave including cyclopes,[2] gnomes, xvarts,[32] myconids, and spriggans.[33]

Other creatures that they were often known to keep within their lairs or settlements included boggles,[34] derros,[35] giant beetles, carrion crawlers, gorgons, ropers, and troglodytes. Out of all the dragon types in the Realms, they were most likely to ally themselves with deep dragons.[36][note 3] 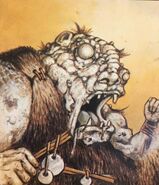 A fomorian wields a mace while dressed in fine clothing.

A sorceress sneaks up behind a bloodthirsty fomorian wielding a wooden club and shield. 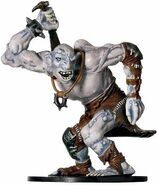 A fomorian, as depicted in the D&D Miniature's set "Giants of Legend." 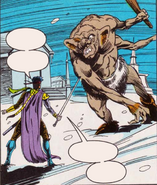 Vajra Valmeyjar faces down a fomorian on a wintery night in the City of the Dead.